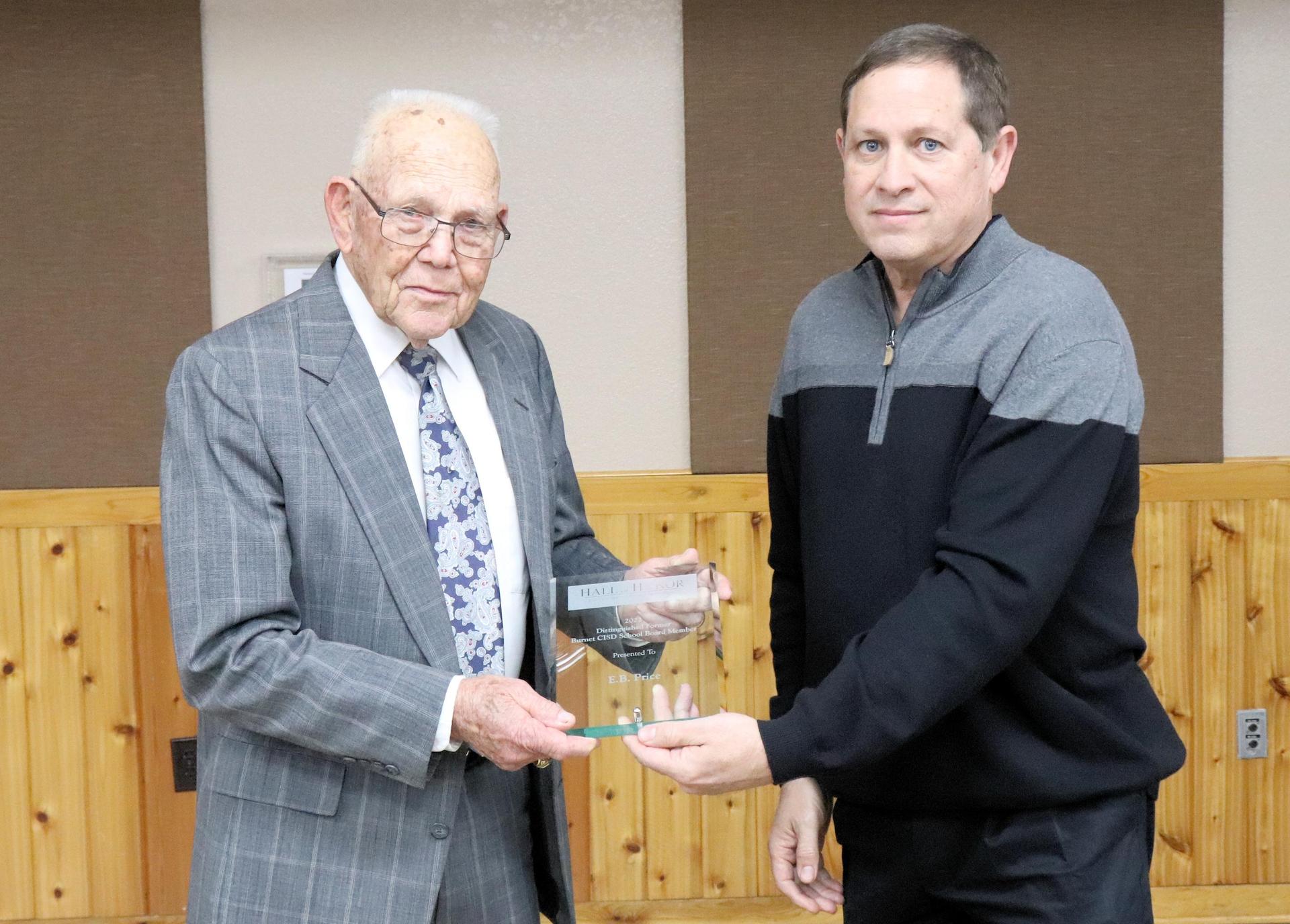 E. B. Price served as a school board trustee from April 1971 to March 1982.  With the consolidation of Burnet and Bertram Schools in 1970, representatives from the two schools joined together to become the Burnet CISD Board of Trustees. Mr. Price was one of the inaugural Board members from Bertram.  During his tenure, the Board was faced with unexpected challenges including a completely destroyed campus following the 1973 Burnet tornado. Even with these challenges, the Board continued their focus on the needs of students and staff and planning for future growth. One of the results of their vision was the construction of the Burnet Intermediate School in 1975.

Besides the dedication to the Board of Trustees, Mr. Price served on the PEC Board of Directors for 30 years, was a precinct chair for Bertram, and served as both a Deacon and Church Secretary for the Joppa Baptist Church for many years.
Mr. Price's true passion is farming and ranching, where he has been in the business since 1966.  He continues to this day to operate a sizeable cattle operation on the family ranch near Joppa.
Mr. Price has continued to support the communities of Burnet and Bertram as well as Burnet schools.  He has been a Burnet Bulldog season ticket holder since the 70’s.  He enjoys hunting, fishing, and most outdoor activities. Just celebrating his 85th birthday, he remains an excellent marksman with both a rifle and shotgun.
When asked what he was most proud of while serving on the BCISD Board of Trustees, Mr. Price replied, “I am most proud of the Consolidation of the Burnet and Bertram school districts. Both districts benefitted from the merger, and have long been a stronger system together as opposed to being separate”.
Mr. Price is pictured with Board Secretary Earl Foster.
Distinguished Former Burnet High School Athlete 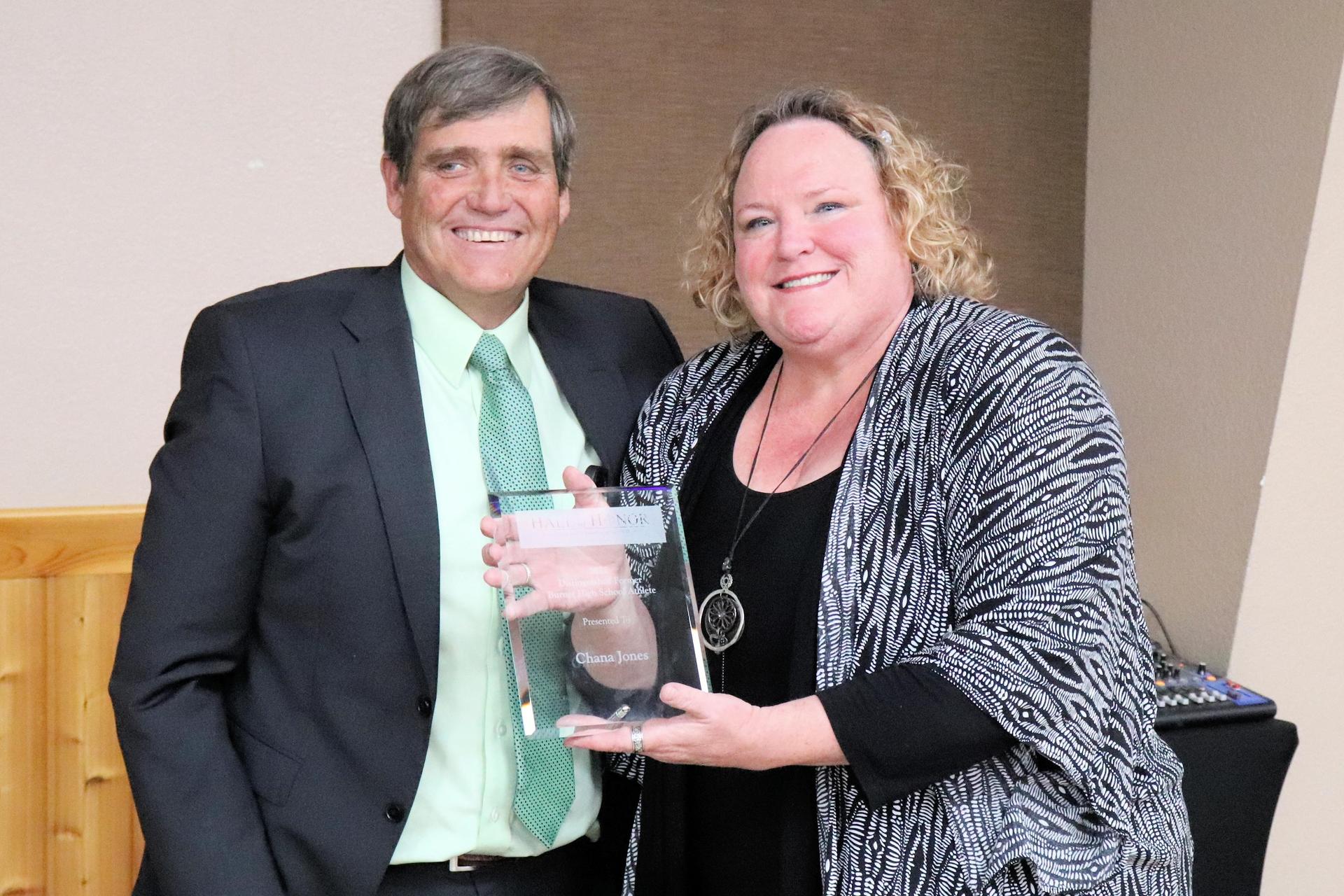 The 2022  Distinguished Former Burnet High School Athlete is Mrs. Chana Jones.
Mrs. Jones is a 1989 graduate of Burnet High School.  In three of her four high school years, she competed at the UIL State Track and Field Meet.  She earned a bronze medal in the shot put, and silver in the discus her Junior Year, and finished her high school career, being the State Champion in the shot put and the bronze medalist in the discus. Mrs. Jones continues to hold the school record in the shot put with a distance of 44 ft. ½ inch. She has always acknowledged Coach Ed Abernathy for his influence on her track and field success.
Mrs. Jones went on to attend Baylor University on a track and field scholarship, where she received her undergraduate and Masters degree.  She taught and coached for 2 years at Yoakum high school, and then transitioned to become a massage therapist.  She continues with this profession today, working locally and in Austin.
She and her husband live in Buchanan Dam and just celebrated their 5th wedding anniversary.  In her spare time, she loves to travel, take cruises, spend time in Rockport, and she enjoys an annual roadtrip with her college roommate.
One thing not many people know about Mrs. Jones, is that for over 10 years, she has donated school supplies for BCISD students.  Annually, in August, she cheerfully brings bags of supplies that are distributed to students of all grade levels.  She never fails to comment that this is her way of giving back to her school and community.
Mrs. Jones is pictured with Board Member Robby Robertson.
Distinguished Burnet High School Graduate 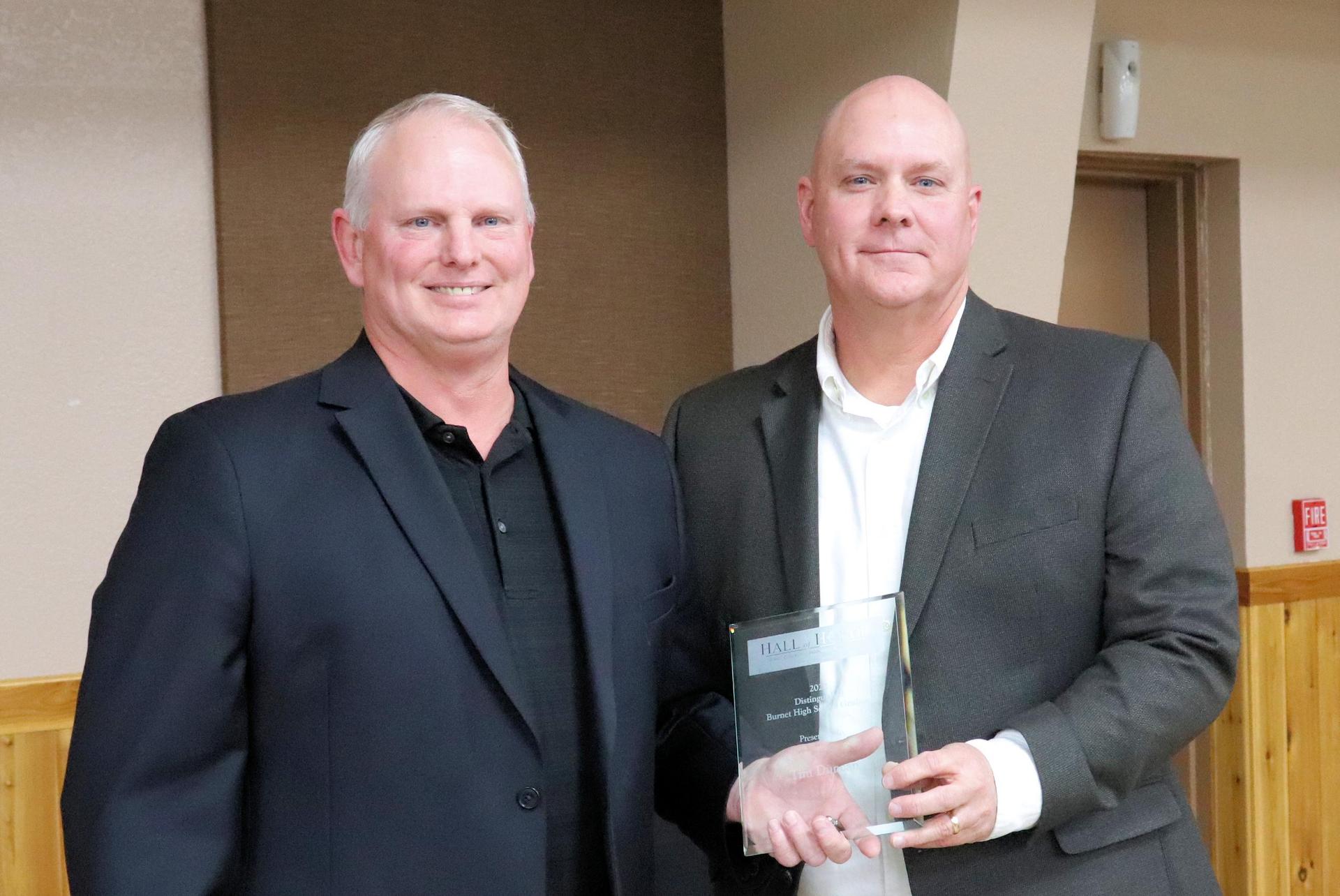 Tim Duncan attended Burnet CISD schools from 1st through 12th grade, and graduated from Burnet High School in 1986 with honors. Some of his accolades from Burnet High School include Mr. BHS, A-B Honor Roll throughout high school, Student Council President, Class President, Captain for Football, Basketball and Baseball teams, American Legions Boys State, and National Honor Society Membership.
After graduation, Mr. Duncan attended Cisco Jr College on a scholarship to play football and earned an Associate’s degree in Business Administration.  He was recruited to play football for Tulane University and graduated with a degree in Art History.  After college, he came back home to Bertram and obtained his Texas Teaching Certification. He then started his career at Burnet Middle School as a history teacher and coach.  Shortly after, he transferred to Burnet High School to teach history and coach, where he stayed until 2001. After leaving Burnet, he moved to Smyer ISD as the Athletic Director/Head Football coach, where he was named coach of the year his first year.  In an effort to expand his experiences and coach at a larger school district, in 2006, he moved to White Settlement and took a job coaching and later became an Assistant Principal.  However, not being able to get coaching out of his system, he took an Athletic Director position at Fort Sam Houston in San Antonio from 2010 to 2015.  After a call from White Settlement, he moved back to the Fort Worth area and is currently the Director of Human Resources and Community Relations for White Settlement ISD.  Our honoree is in his 31st year in education and has spent his entire career working with students, but especially working as a coach because of his love for sports and being able to help students succeed on and off the playing field.
Mr. Duncan has been married to his wife Lea for 23 years.  She is the Director of Secondary Education in White Settlement ISD.  They have 2 Children, a son Adam and daughter Mattie. Our honoree is still invested in the community and owns property outside of Bertram. He understands the importance of “home” and Burnet will always hold a special place in his heart. Please join me in congratulating the 2022 Hall of Honor Distinguished Burnet High School Graduate Mr. Tim Duncan.
Mr. Duncan is pictured with Board Member Ross Behrens.
Distinguished Former Burnet CISD Employee 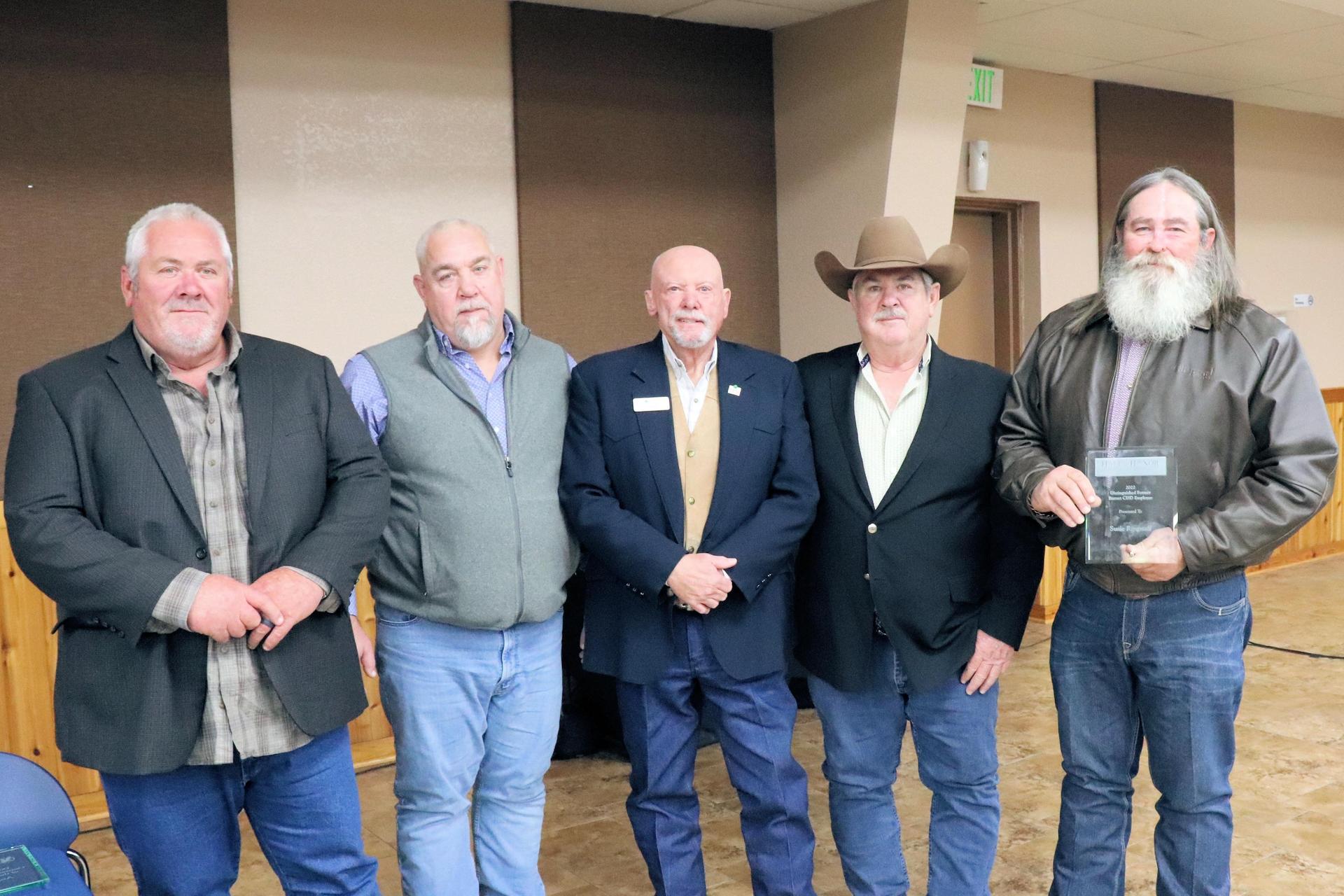 Susie Ringstaff was a lifetime resident of Bertram and Burnet. She attended school in Oatmeal and Bertram and graduated from Bertram High School. She graduated from the Brackenridge Hospital School of Nursing in 1959, and went on to work as an RN at the Allen Clinic and Hospital in Burnet, where she became the Director of Nurses.
In 1978 Mrs. Ringstaff began a 25 year career as School Nurse for Burnet CISD and retired from the District in 2003. During her time with Burnet CISD, she established many of the protocols and practices that are the foundation of the District’s health services today. More importantly, she created lifetime friendships with co-workers and the families she served.
Mrs. Ringstaff was married to Clinton Ringstaff for 36 years and they had 4 boys, all who attended Burnet schools from Kindergarten to Graduation. She enjoyed canning pickles, making homemade jelly, and sharing it with her family. One of her favorite hobbies though was watching her 4 sons, 9 grandchildren, and 18 great-grandchildren play in their football and baseball games, and show in livestock shows.
Mrs. Ringstaff passed away in November of 2020, but as a pioneer in school nursing, she left an indelible mark on Burnet CISD and the health services program. Accepting this award on behalf of Mrs. Ringstaff are her four sons: Scott Ringstaff, Michael Shane Ringstaff, B Rinstaff and Chris Ringstaff, who are pictured with Board President Andy Feild.