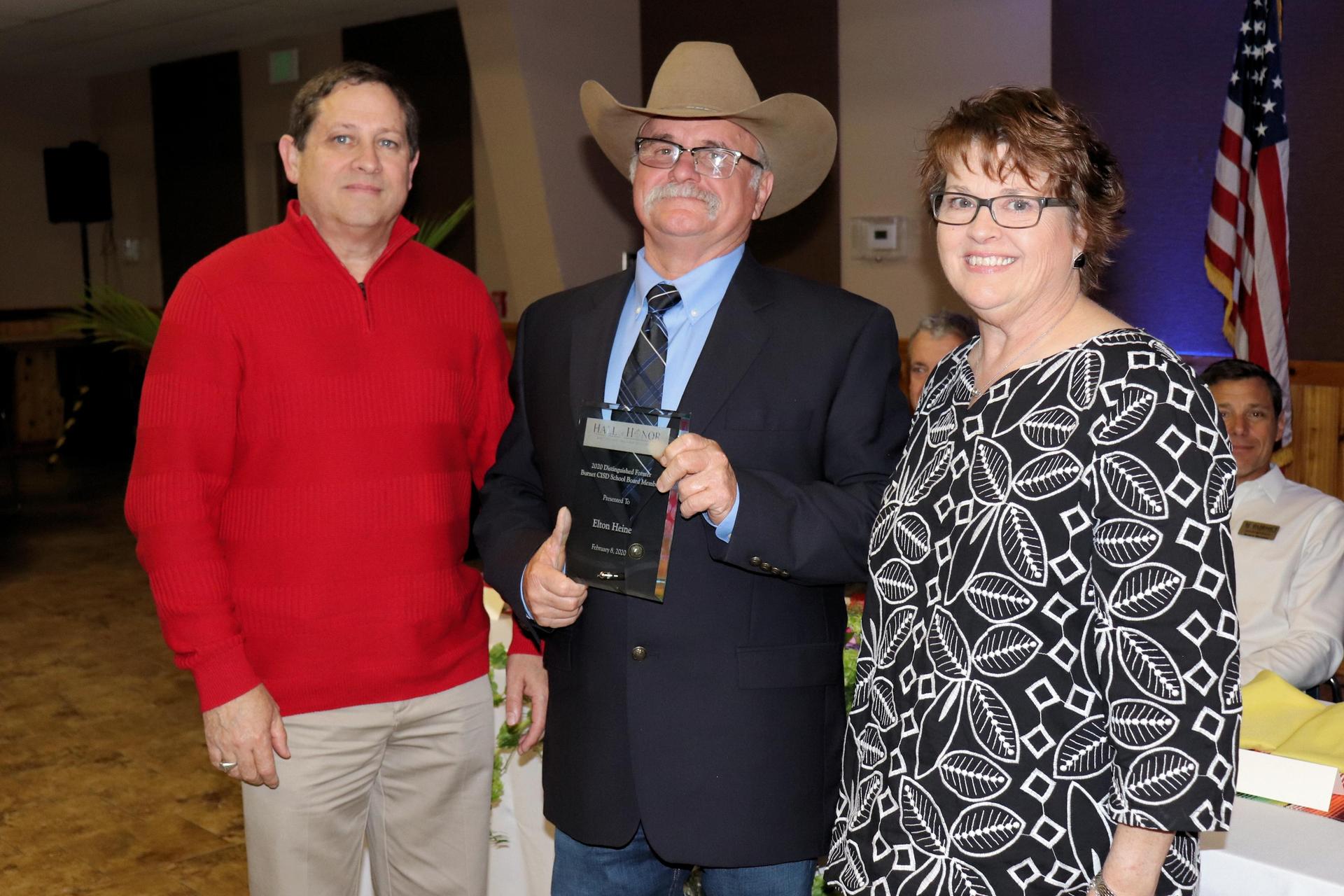 Burnet CISD’s honoree for Outstanding Former School Board Member is Mr. Elton Heine. Mr. Heine served two separate terms on the Board of Trustees from 1998 to 2005 and from 2006 to 2009, never missing a meeting during his 12 years of service. He held the office of president for 7 of those years.
While on the Board, Mr. Heine was instrumental in hiring the high school principal and also superintendent. During his term, a significant bond was passed that built Burnet High School and provided renovations to Bertram Elementary and RJ Richey, adding capacity to a rapidly growing district. He is known for making decisions based on the positive impact to students and staff. You can look all around the district and see the changes Mr. Heine had a part in from learning, to facilities, to extracurricular to salaries. It was not uncommon for Mr. Heine to spend weekends or after work fixing or building something in the district. He continues to be an advocate for BCISD and takes great pride in the district.
Besides the dedication he gave to the Board, Mr. Heine is, and continues to be, involved in the Bertram and Burnet communities. He has been active with Bertram Little League, Oatmeal Festival, Burnet County Fair and Rodeo Association, Pop Warner/Kiwanis Pee Wee Football and Bertram Community Association. He has served on two BCISD bond oversite committees. He is a silent hero in the community and serves others without wanting recognition. Proof of this is the service and generosity he continually bestows upon Burnet CISD and the community.
Professionally, Mr. Heine is employed at the Region 13 Service Center as the Administrative Services Coordinator of Operations. He previously worked with PEC for 20 years and Williamson County for 10 years where he retired from both positions.
He lives in Bertram with his wife Aline. They have one son Kyle and daughter-in-law Shannon (Kyle is a BCISD graduate and currently works for the district) and 3 grandchildren who are or will attend Burnet CISD.  Mr Heine is pictured here with Board Secretary Earl Foster and Board Vice-President Angela Moore.
Distinguished Former Burnet High School Athlete: 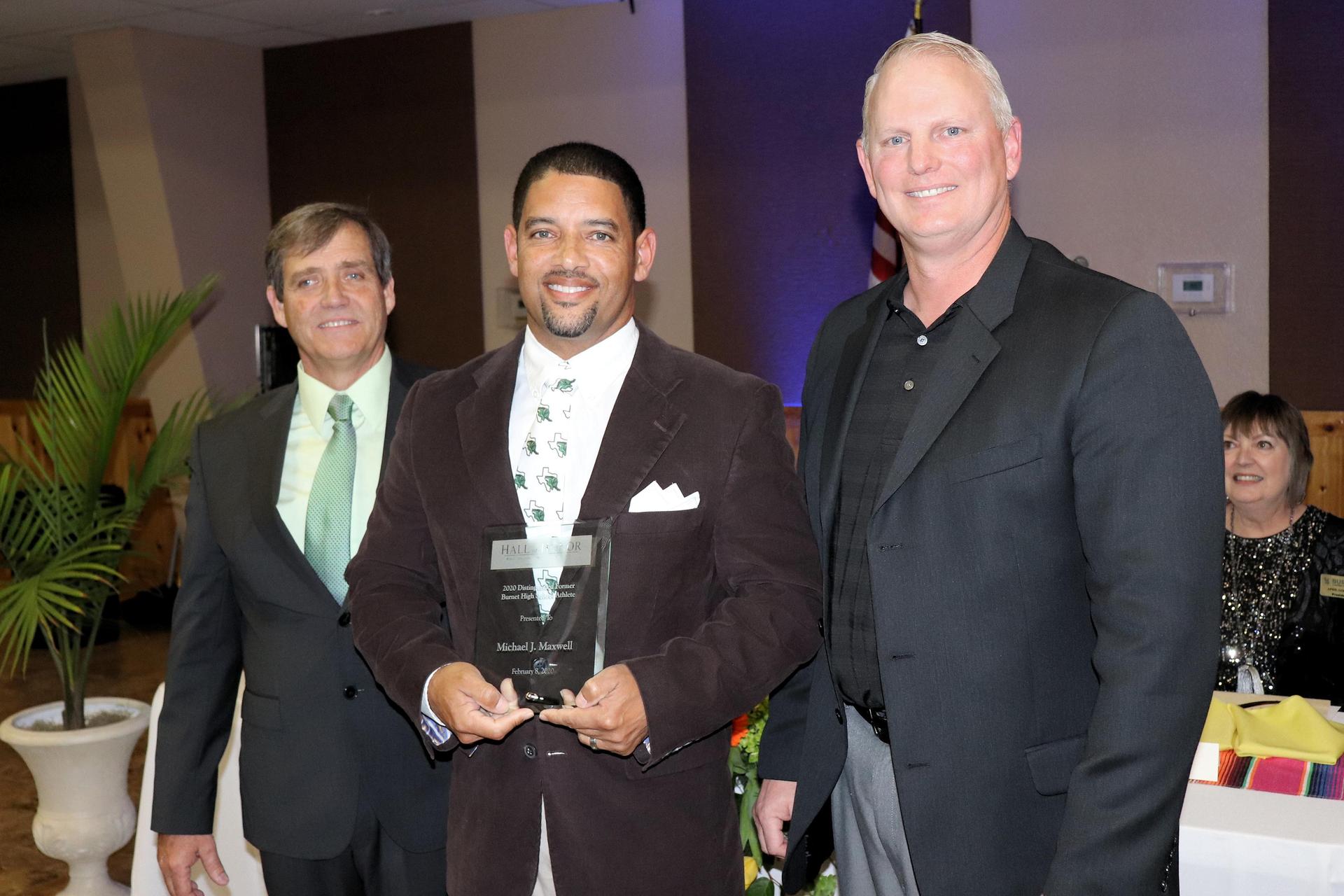 The Honoree for Distinguished Former Athlete is Dr. Michael Maxwell. Dr. Maxwell is a 1991 graduate of Burnet High School.
During his time in BCISD, he was lettered 6 times in the sports of football and track. Dr. Maxwell was a 2 time head football captain, a 2 time All-District Defensive Back, received All-Centex Honors in football, and was a 3A, All-State Honorable Mention defensive back his senior year. He lettered in track for 4 years, was a 3 time regional qualifier in the high jump, 4x100 meter relay, 100 meter dash, 200 meter dash, 4 x 100-meter relay, 4 x 400-meter relay. He was part of a school record breaking 4X400 meter relay team. Dr. Maxwell was named the Burnet Bulletin Track MVP in 1990. In high school he also participated in Fellowship of Christian Athletes, was in the National Honor Society, received top honors in English and Biology, and graduated in the top 10% of his class.
After high school, Dr. Maxwell went on run track at Texas State University on a 4 year scholarship, earning 4 letters. While at Texas State, he was a multiple All-Academic Conference student athlete, was part of 2 Southland Conference Championship teams as a runner. He is also listed as a member of a top five, 4x100 meter relay team at Texas State University.
After graduating with his bachelor’s degree in Psychology and Exercise Science in 1996, he remained with the team as a graduate assistant coach. While coaching at Texas State University, Dr. Maxwell was part of 3 Southland Conference Championship teams. He also assisted in the speed development of multiple Olympic medalists, World Champions, and NFL draftees. He graduated, again, from Texas State with a Masters in Counseling and Guidance in 1999. He would later go onto to complete his PhD in Counselor Education from Sam Houston State University in 2009.
Dr. Maxwell currently works as a Licensed Professional Psychotherapist in his own private practice. He has previously worked as a therapist with juvenile delinquent incarcerated youth, incarcerated adults, psychiatric patients, as an elementary school counselor, and as a secondary school counselor. He also teaches graduate level counseling courses at an area University. He is an accomplished author of over a dozen published works and a sought-after public speaker.
Dr. Maxwell currently lives in Lewisville with his wife Tracey and 3 children. He enjoys exercising, playing sports, writing, speaking, and remaining active in his community and church. Dr. Maxwell was presented with his plaque by Board members Robby Robertson and Ross Behrens.
Distinguished Burnet High School Graduate: 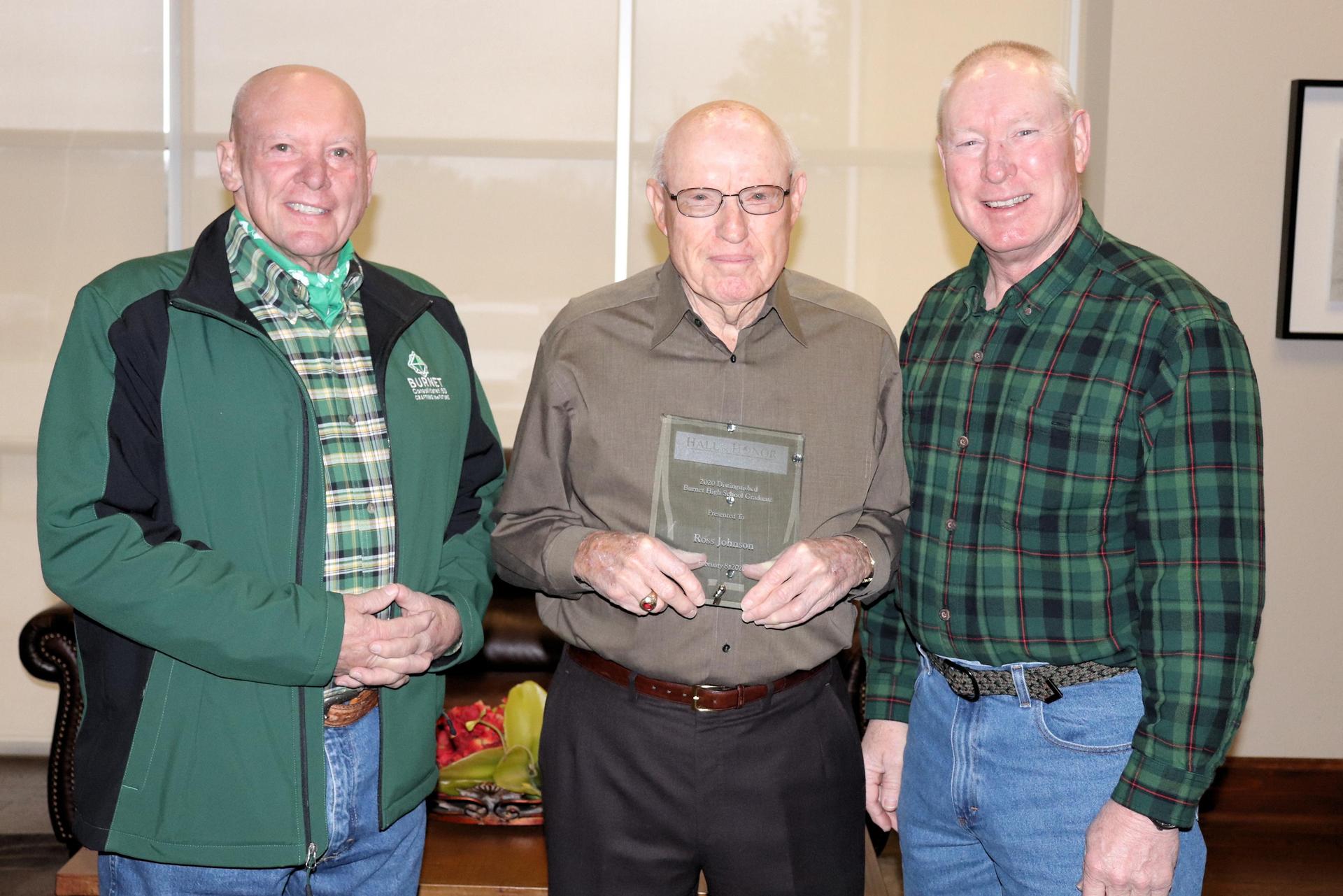 The honoree for Distinguished Burnet High School Graduate Is Ross Johnson. Ross Hudson Johnson, Jr. was born on October 21st, 1926 to Ross Hudson Johnson, Sr. and Louise Chamberlain Johnson in Burnet, Texas. He grew up in Burnet, where both his grandparents also lived. His mother’s father owned “The Burnet Bulletin” and also the “The Burnet Hotel.” His father’s father owned the only title company in Burnet. His roots were well established in Burnet as a young boy and have remained so all his life.
Mr. Johnson was a member of the 1944 graduating class. At Burnet High School Ross Johnson was the Captain of the Bulldog Football Team, Captain of the Tri-District Champion Bulldog Basketball Team and played tennis. He served in the Air Force and attended Texas A&M University and Tarleton University, before graduating from Southwestern University in Georgetown.
Mr. Johnson grew up during the “Great Depression” and also World War II. After graduation from Burnet High School in 1944, he entered Texas A&M, where he was in the Air Force Cadet Training. After a year and one-half, he was called into the Air Force in 1945. He was in training in California when the war ended and he was released back into civilian life. He went back to college at Tarleton State to get back into a college mode before transferring back to A&M.
During this time, Mr. Johnson made a visit to see a friend at Southwestern University in Georgetown and happened to run in to Alice Burnam of Marble Falls, who then was a sophomore at S.W. A few weeks later he called her and asked her to a dance being held in Burnet. They started dating at that time. Mr. Johnson transferred to Southwestern in the fall of 1946 and they became engaged in April of ’47. Before starting back to college, which back then did not start until past the middle of September, they were married on September 10th, 1947 in a formal wedding at the Methodist Church in Marble Falls. They went back to Southwestern to finish college and start their new lives. After college, Mr. Johnson was employed by Brown & Root, Inc.
Two beautiful children were born—Luann Johnson(5-16-51) and Ross Hudson Johnson, III (8-1-53). They have four grandchildren and six great-grandchildren, which have been a joy in their lives.
After working for Brown & Root, Inc in Houston for 13 years and in Haiti for 3 years, Mr. Johnson went into the concrete pipe business for 14 years in Houston. At this time it was sold, and he was fortunate enough to find a chance to buy “The Ford Dealership” in Burnet and come back home! This has given him the opportunity to be a part in doing things for his hometown, as well as his alma mater.
Mr. Johnson has always believed in helping others and has made it a priority. This pretty much sums up his life, which has enabled him to do the things that have made him really feel worthwhile—doing for others, no matter how large or small.
Mr. Johnson was unable to attend the banquet but Board members and administrators were able to travel to the Ford dealership earlier in the week, prior to the banquet and present him with his award. Mr. Johnson is pictured with Board President Andy Feild and Board member Mark Kincaid.
BCISD Distinguished Former Employee 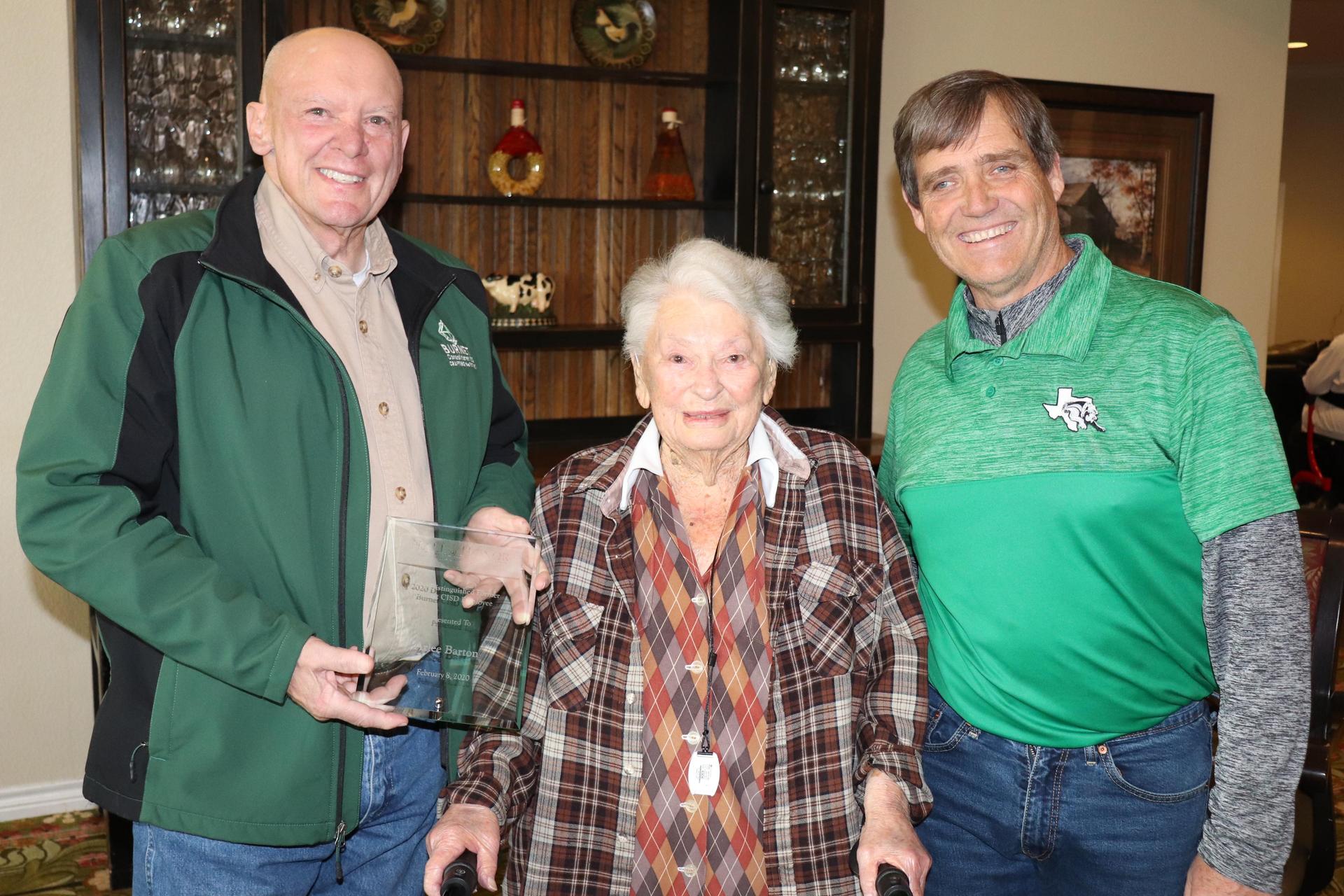 The Hall of Honor Distinguished Former Employee if Mrs. Arlee Barton. Mrs. Barton graduated from the University of Texas in 1943 with a degree in Home Economics. She moved to Burnet in 1944 to teach. She lived with Dr. and Mrs. Charlie Craddock until she married in 1947. Mrs. Barton’s teaching career spanned for a total of 33 years where she taught Science and Homemaking for one year in Bertram and taught homemaking for one year in Briggs. She then served Burnet Schools for an amazing 31 years where she taught middle school and high school home economics.
Besides teaching home-making, she was involved in many aspects of the school. She was in charge of the annual for many years, was a senior sponsor, Future Homemakers of America sponsor, taught summer homemaking courses, and annually facilitated the Sweetheart Banquet and Style Show.
There are very few who were in school during the time that she taught that were not privileged to be in her homemaking class. Mr. Barton was known for a no-nonsense classroom but was also known as the teacher who gave every single student a chance. She loved her job working with students and never forgot what an impact she has on their lives. She has kept photos of all the years she taught and collected photos and followed the careers of many Burnet graduates. She put together a video showing photos from her collection, naming names, telling stories and preserving the history of the schools. That video is still available in the Herman Brown Free Library.
Mrs. Barton is known for being a prankster and loved playing jokes on faculty members. She once sewed all the sleeves of Dr. Craddocks shirts together, but he put rice in her bed to get back at her. It has been told that students once stuffed her in a locker – which she thought was funny.
Outside of the school, Mrs. Barton has been involved in many community organizations. She was a member of the American Legion Auxiliary, the Pen Chat Club, Epsilon Pi, Delta Kapa, Burnet EMS, City Planning and Zoning Board, City Water Board, All Class Reunion Committee and volunteered at the Library Thrift Store and Angel Food Ministries. She was recognized as Burnet’s Honor Citizen in 2011. Mrs. Barton has been a faithful member of the First United Methodist Church since she first moved to Burnet. She is proud of her 3 grandchildren, 7 great grandchildren, and 8 great grandchildren.
Mrs. Barton has touched and continue to touch countless lives and has left a legacy in this district like no other. Because of her, Burnet CISD and this community is a much better place. Mrs. Barton was unable to attend the banquet,  but the district will set up a time to present her with her recognition plaque and take a picture to post on the website.