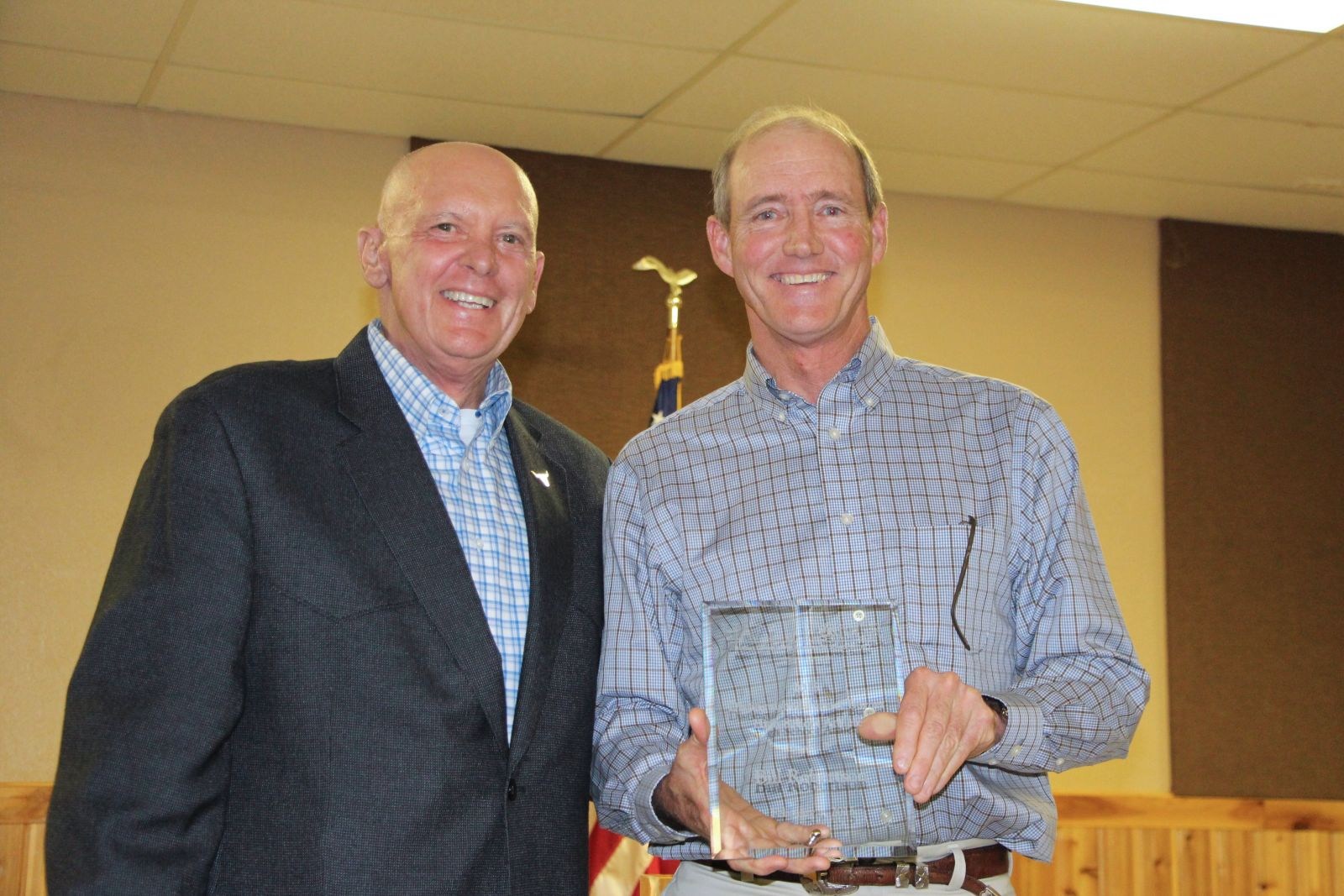 Bill Robertson, class of 1977, has been an avid contributor to the community since his high school years. Not only was he student council president his senior year; he also represented Burnet as a letter-winning member of the swim team all four years. As an upperclassman, Bill was a two time state finalist. After graduating from Burnet High, Bill went on to attend the University of Texas in Austin, for whom he also swam. Bill was a letter winner and Southwest Conference finalist all four of his collegiate years. In 1979, Bill was ranked in the top 20 in the world in the 1500 meter freestyle; and in 1980, he competed in the Olympic Trials. During his career, the Texas Swimming and Diving team won the SWC championship in 1980 and again in 1981.
After graduation, Bill moved back to Burnet and began his employment at Camp Longhorn in 1982. Simultaneously, he coached the BHS swim team from 1982-1986. These were busy years for Bill, as he married his college sweetheart, Carol, and together they had four children (Jim, Will, Joe, and Fran) - all of whom swam for Burnet High School. He continued on as the state meet director for 3A & under state-level swim meets until 1999. That same year, the Burnet Chamber selected Bill as Burnet Outstanding Citizen, for his contributions to the construction and completion of the Galloway-Hammond Recreation Center. With his 15 year dream of an indoor Aquatic Facility realized, he established (and continues to be involved with) the Hill Country Swim Boosters. He is the President of WETS (Working Exes for Texas Swimming & diving) as well as President of the Texas Swimming and Diving Hall of Fame. In addition, he has retained membership in the Burnet Kiwanis Club since 1987. Board President Andy Feild presented Bill Robertson as the Burnet CISD Distinguished Former Athlete.
Burnet CISD Distinguished Former Board Member 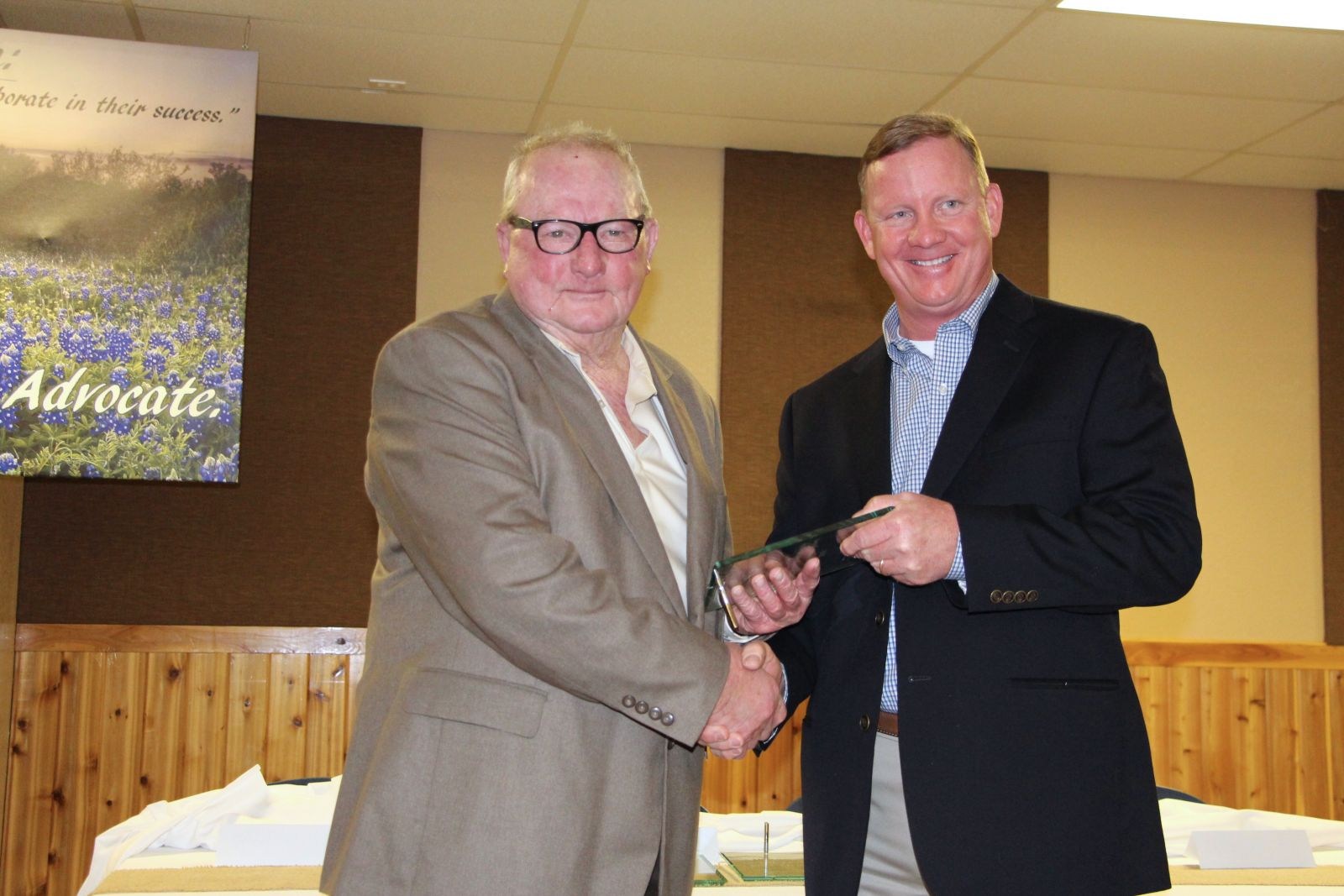 Gene Taylor served on the Board of Trustees of Bertram ISD from 1965 until 1970, which was the last year that Bertram had its own school district before consolidating with Burnet. Mr. Taylor served as President the last two years of his tenure. This was an extremely difficult time for the Bertram Board. TEA demanded that upgrades be made to the school structures, but due to the lack of a local tax base and dwindling allotment from the State, this could not possibly happen. The Board worked tirelessly to keep the Bertram schools from facing consolidation, but in the end, there was no other option.
Due to Mr. Taylor's continued interest in education, he served on the BCISD Board of Trustees from 1976 to 1984, where he was President for 6 of those years. Mr. Taylor's wife stated that one of his greatest accomplishments during his tenure was BCISD selling the Bertram football field to the City of Bertram for $7,000 at 0% interest, to be paid out in increments of $1,000 per year. The former field is now home to the Bertram Little League complex and a frequently booked community pavilion. Gene Taylor and his wife Annie Dell, both graduates of Bertram High School, continue to be extremely involved in the school district and community. Their two children and two grandsons graduated from BHS. They have one granddaughter who is a BHS sophomore. Board Vice-President Jim Luther, Jr. presented Mr. Taylor as the distinguished former Board members. 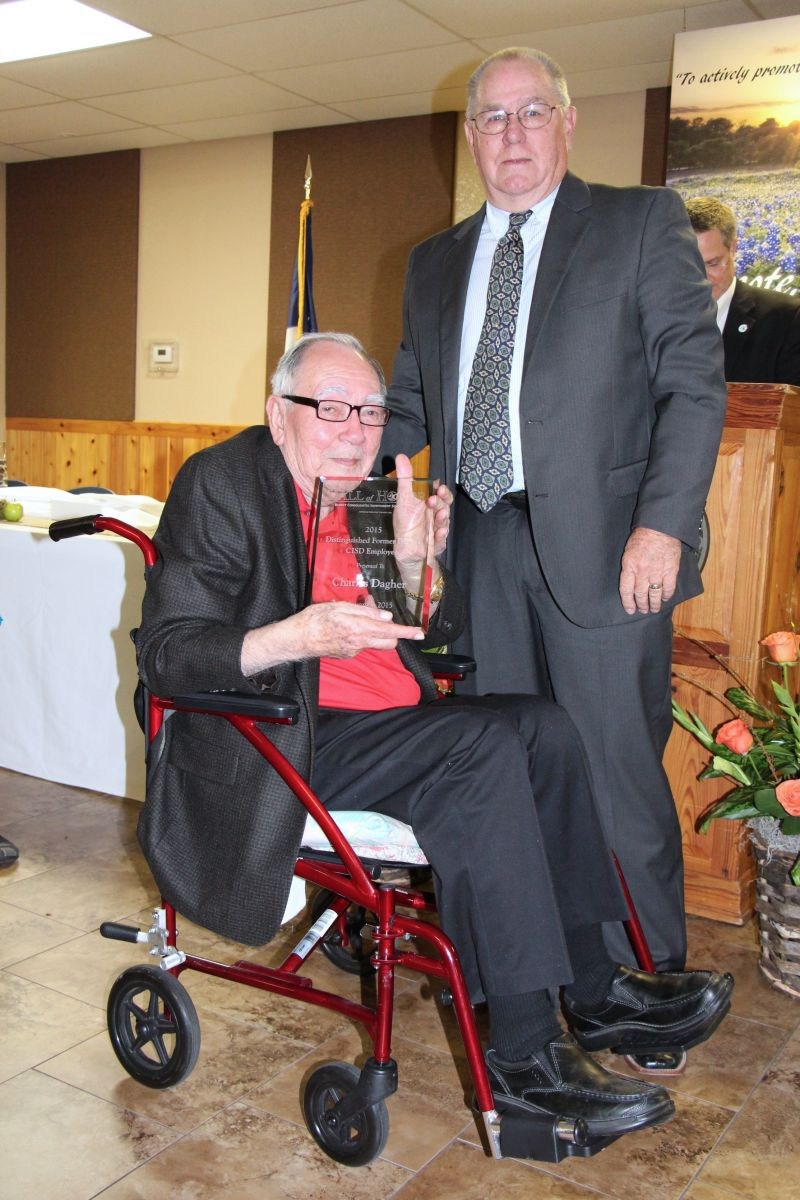 The recipient of Burnet CISD’s Distinguished Former Employee award started teaching in 1949 in Runge ISD where he taught for 10 years. He then moved to teach at Comfort ISD for 7 years. However, the largest portion of his teaching career was here in Burnet CISD. He started teaching for BCISD in 1966 where he taught for 46 years. His total combined years of teaching experience is 63 years. If his classes averaged just 20 students per year, he would have personally taught and touched the lives of well over 1200 students during his career.
But, it doesn’t stop there. Since his retirement, he has tirelessly volunteered his time at RJ Richey Elementary where he still, to this day, works at the school a couple of days a week. There is never a conversation about teachers in Burnet in which someone doesn’t mention that their favorite teacher was Mr. Charles Dagher. Burnet CISD was extremely lucky to have him as a role model and dedicated teacher. He is loved by many and has certainly established a legacy in Burnet CISD. Mr. Charles Dagher, BCISD Distinguished Former Employee, is pictured here with presenter and Board Member Charles Williams.
Burnet CISD Distinguished Burnet High School Graduate 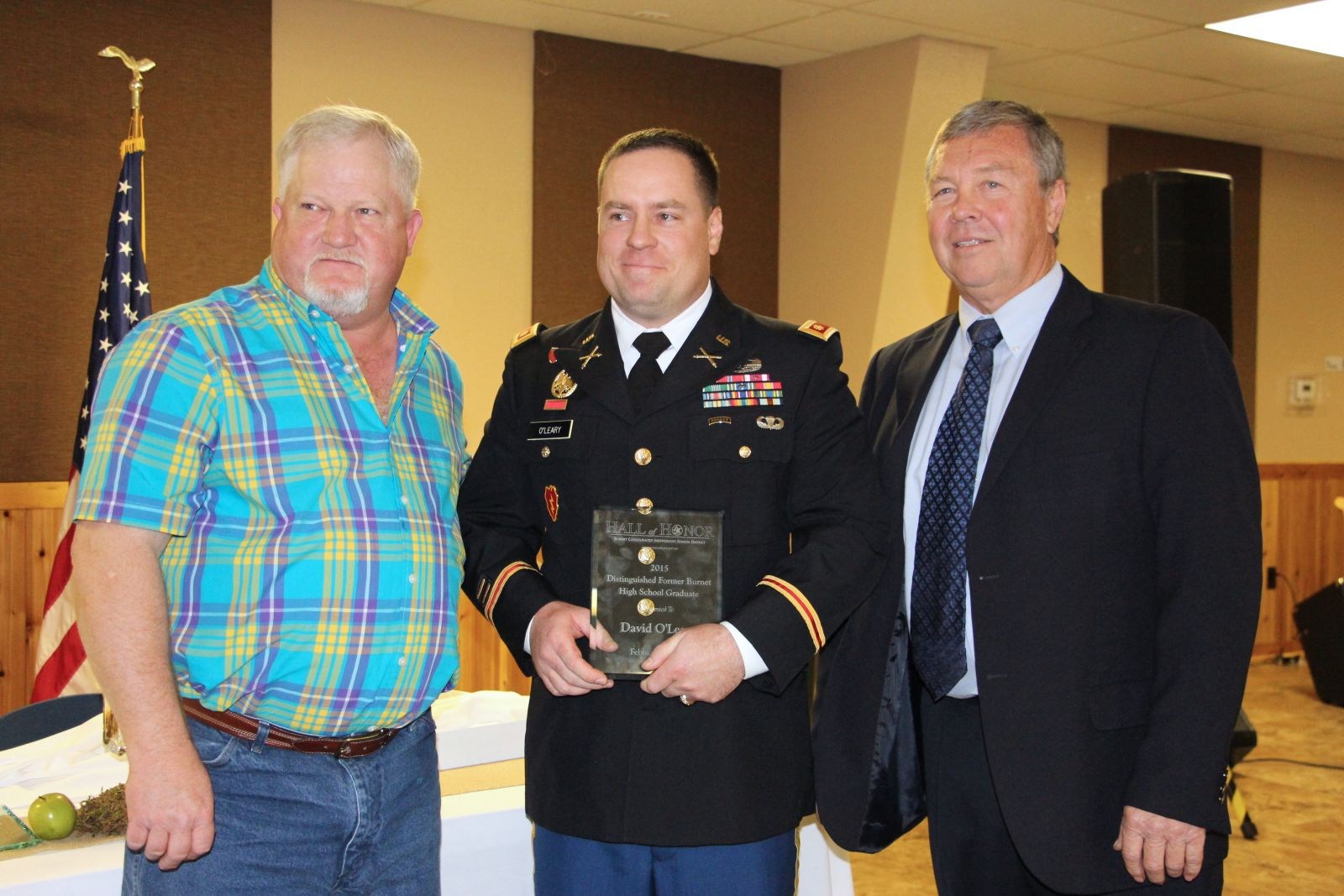 David O’Leary is a top ten graduate from Burnet High School’s Class of 1998, where he was a member of the National Honor Society, the varsity football team, and a Boys State delegate. Post-graduation, David attended the United States Military Academy at West Point, graduating in 2002. At West Point, he made the Dean’s List for eight semesters and earned the Superintendent’s Award (gold stars) for maintaining an “A” academic average.
Currently a Major in the United States Army, David has had much professional success. He is an Airborne Ranger, combat veteran and three-time commander, including two battery commands in the Republic of Korea and a Cadet Company command at West Point. Academically, David earned two masters degrees – one in Psychology from Columbia University and a Masters of Military Arts and Science from the U. S. Army Command and General Staff College. He also graduated from the Command and General Staff Officer Course at the Western Hemisphere Institute for Security Cooperation, conducted entirely in Spanish. Finally, David continues to challenge himself personally, speaking four languages, holding a Black Belt in Taekwondo and having served as an Adjunct Professor of Spanish at Saint Thomas Aquinas College,Wallkill, New York. Board members Jeff Hullum and Craig Barefoot are pictured here congratulating Mr. David O’Leary as the BCISD Distinguished Burnet High School Graduate.