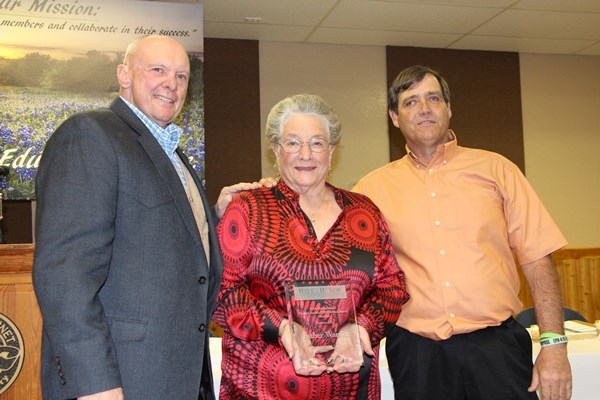 The Burnet CISD Distinguished Former School Board Member served on the Board of Trustees from 1987 until 2002 and then again from 2004 until 2007 filling 2 unexpired terms. During her years on the Board, she was known for being very involved “watching” everything whether it was listening to a teacher, reading every word in the Board packet or wondering why we would buy new shovels instead of replacing the handles. Although she has not served on the Board for many years, she continues to be an avid supporter of BCISD and you will see her at many events. Being a lifelong member of the Burnet community, she has not only served the staff and students of the school district but also has served on many organization, boards and committees in the Burnet community, including the chamber board. Esther and her husband A.W. ranch and have owned and operated a business in the Burnet community. They have 4 children, 9 grandchildren and 2 great grandchildren. We are pleased to present Esther Warden as the BCISD Distinguished Former School Board Member for her many years of dedicated commitment to the staff, students and parents of the school district. Esther is pictured below with Board President Andy Feild and Board member Robby Robertson. 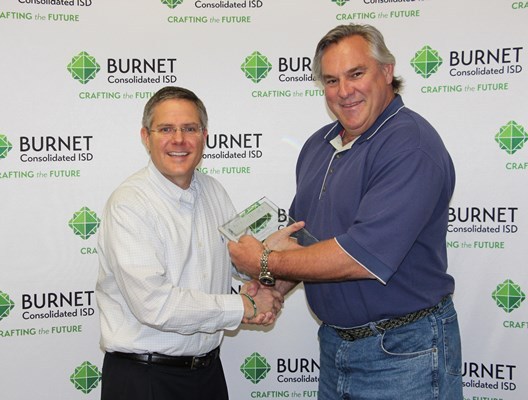 Doak Field was born in Burnet County on a small ranch near the Lake Victor community and sports came natural for all 5 members of the Field Family and all of the Fields were Bulldogs. Doak excelled at football, basketball, baseball and track while at BHS. The Bulldogs won the football district championship in 1974 when Doak was a sophomore starting linebacker for Ray Frady’s Bulldogs. Doak was named to All-District teams multiple years in every sport he participated in and All-State in football. By the time he was a senior during the 1976 football season every college in the Southwest Conference was recruiting Doak along with many other schools around the nation. Doak ultimately chose to attend Baylor over UT in a photo finish. During Doak’s career at Baylor he started at linebacker 36 of the 46 games he played in. Doak was named 1st Team Consensus All-Southwest Conference in 1981, the same year he was a team captain. Doak went on to be chosen to play for the West team in two college All-Star games and still holds several Baylor tackle records and holds the distinction of having been the leading tackler in every bowl game (Peach, Cotton, Hula and Japan Bowls) for the teams that he played on. He earned his BBA in Marketing/Management from Baylor. Doak was drafted in the 1981 NFL draft by the Philadelphia Eagles in the 7th round, but ended up playing for the St. Louis Cardinals in 1981. During the 1982 NFL strike, Doak signed to play in the new USFL for Hall of Fame coach George Allen. Doak played all 3 seasons in the USFL before suffering a career ending injury in 1985. Doak and his wife Karan have lived in Boerne for the past 25 years and they have 3 children. Doak was unable to attend the Chamber Banquet due to his involvement in a nonprofit organization in Boerne that was having their annual gala on the same night. Board member Jeff Hullum accepted the award on his behalf. Doak stopped by the Central Office a few days later to accept his award from Superintendent Keith McBurnett. He wants Burnet CISD, the Burnet Chamber and the community to know that he is deeply honored to be named to the Hall of Honor and wishes to offer his thanks for this recognition. 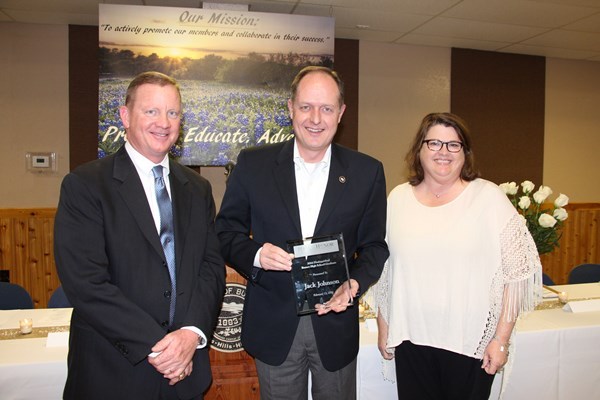 Senator Jack Johnson graduated from Burnet High School in 1986. After high school graduation, he attended Texas State University in San Marcos where he graduated with a degree in education. Shortly after graduating from Texas State, he moved to Tennessee and started a 23 year career in the banking industry. In 2006, Johnson was elected to the Tennessee State Senate where he is currently in his 3rd term serving as a State Senator for Tennessee’s 23rd District, encompassing all of Williamson County. In addition, he and his wife own and operate a number of small, community markets in Williamson and surrounding counties. Jack was raised to understand the importance of family and the honor found in a hard day's work, to preserve, protect and respect our freedoms, both for ourselves and others, and to take pride in a community that remembers its past, works in the present and focuses on the future. Jack Johnson has proudly called Franklin Tennessee "home" where he lives with his wife Deanna and their 3 children. He is a very active member of the Williamson County Children’s Advocacy Advisory Board and the Monroe Harding Children’s Home Board as well as many other community organizations. Jack continues to show support to the Burnet community where he and his sisters hold an annual scholarship fundraiser supporting the Hill Country Community Foundation in honor of their mother, Suzanne Johnson. To date, they have raised over $480,000 in support of scholarships for graduating seniors from Burnet and Quest High Schools. Jack is pictured below with Board Vice-President Jim Luther, Jr., and Board member Angela Moore. 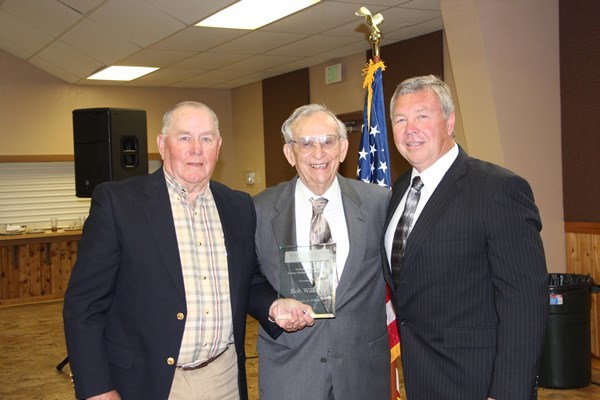 Burnet CISD Distinguished Former Employee served in the United States Air Force for 5 years. After discharge from the military he attended the University of Texas and earned a degree in History and later a degree in education administration. His work history in the public school system spanned more than 33 years. He started his education career as a Jr High teacher for Quincy Public schools and then became a Supervisor and Superintendent for Bastrop County schools. He then became Superintendent of Burnet CISD in 1968 until his retirement in 1981. He proved to be a progressive leader for Burnet schools. Early in his administration, he fought in support of the consolidation of the Burnet and Bertram school districts and was instrumental in passing the school bond for the new high school that opened in 1971 (now serving as Burnet Middle School). His leadership helped rebuild the school and community after the tornado. He also served and was active on the Region 13 Service Center’s Board of Directors. After his retirement, he continued to be very involved in the Burnet Community where he served several years on the Burnet city council and other civic organizations. Bob and Adele Wilkin are still proud residents of Burnet and are active members of the First United Methodist Church of Burnet. It is with great pleasure that we present Mr. Bob Wilkin with the Burnet CISD Distinguished Former Employee Award for his dedication, leadership and impact he had for the students and staff of Burnet schools. Mr. Wilkin in pictured below with Board Secretary Charles Williams and Board member Craig Barefoot.