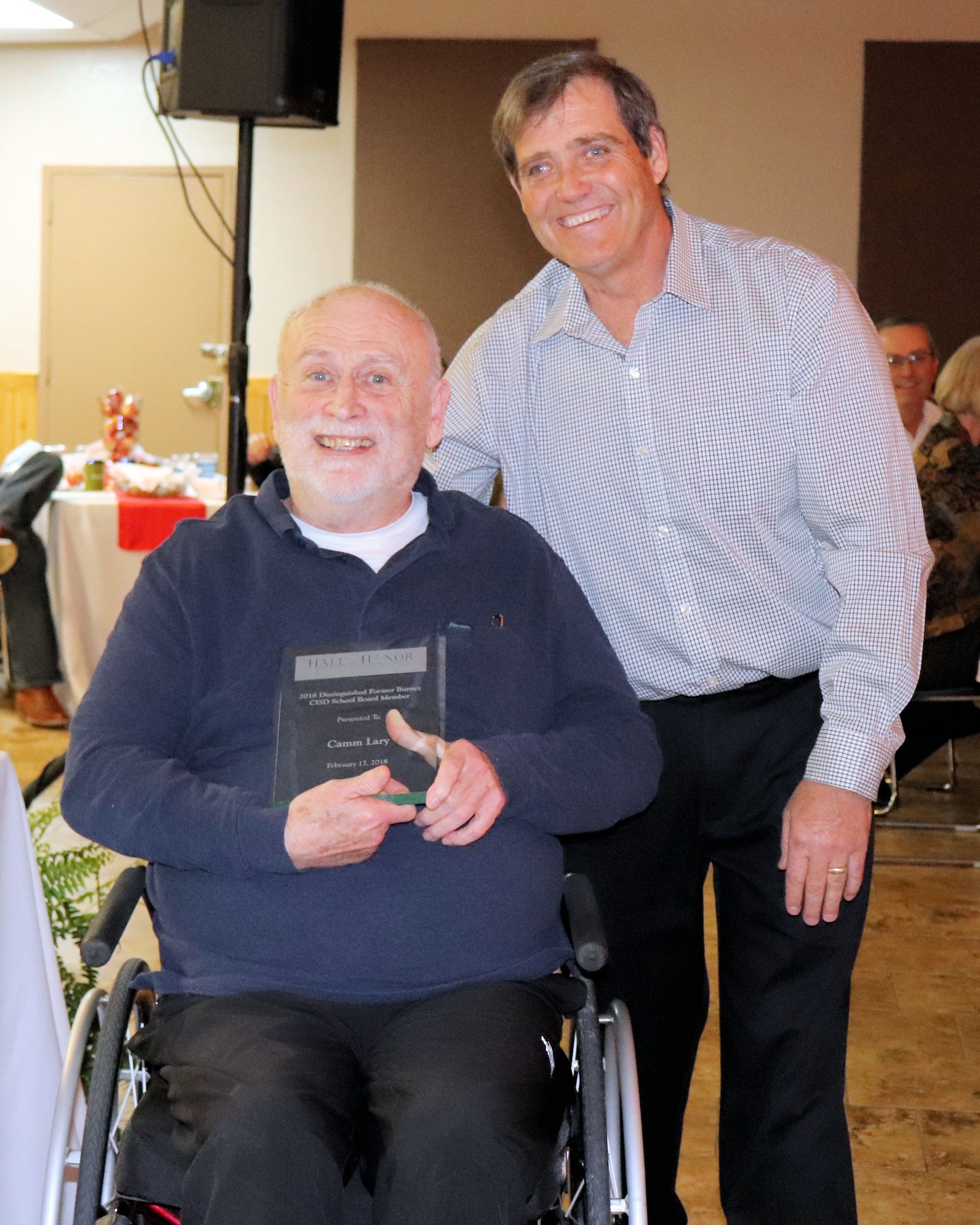 The 2018 Hall of Honor Distinguished Former School Board Member is Mr. Camm Lary, Jr.  Mr. Lary is a product of Burnet Schools. His parents moved to Burnet when he was only a year old. He was raised in Burnet and educated in Burnet Schools and chose the same for his two children. Burnet Schools prepared him well for his future education at Texas A&M University and the University of Texas Law School. His service on the School Board was just one way to give back to his alma mater and community.

Mr. Lary served three terms on the BCISD Board of Trustees, from 1985 to 1994. As a small businessman, he brought a business-like approach to the School Board. His recognition that BCISD was a large institution and needed to be run using best business practices was shared by fellow trustees and longtime friends like Barney Baker, Kelvin Keele, Esther Warden, Gary Barnett, and Robby Robertson. Together, they enacted many reforms.

During his tenure, the School Board led efforts to improve academic standards from the youngest to the oldest students. In elementary school, reading programs were given renewed emphasis. In high school, greater attention was given to college readiness. These efforts were extraordinarily successful.

It’s hard to remember, but there was life before computers. The emergence of computers and the use of technology in education presented new challenges to the School Board during our honoree’s service. However, he and his fellow Trustees saw more opportunities than challenges and led the way during this critical time.

Even when not serving as a Trustee, Mr. Lary has always supported Burnet Schools -- from serving as a State Representative to being a proud Bulldog Booster for his children’s sports and extracurricular activities.

Of course, everything he has done for Burnet and Burnet CISD, he has done with the constant love and support of his wife of 50 years. 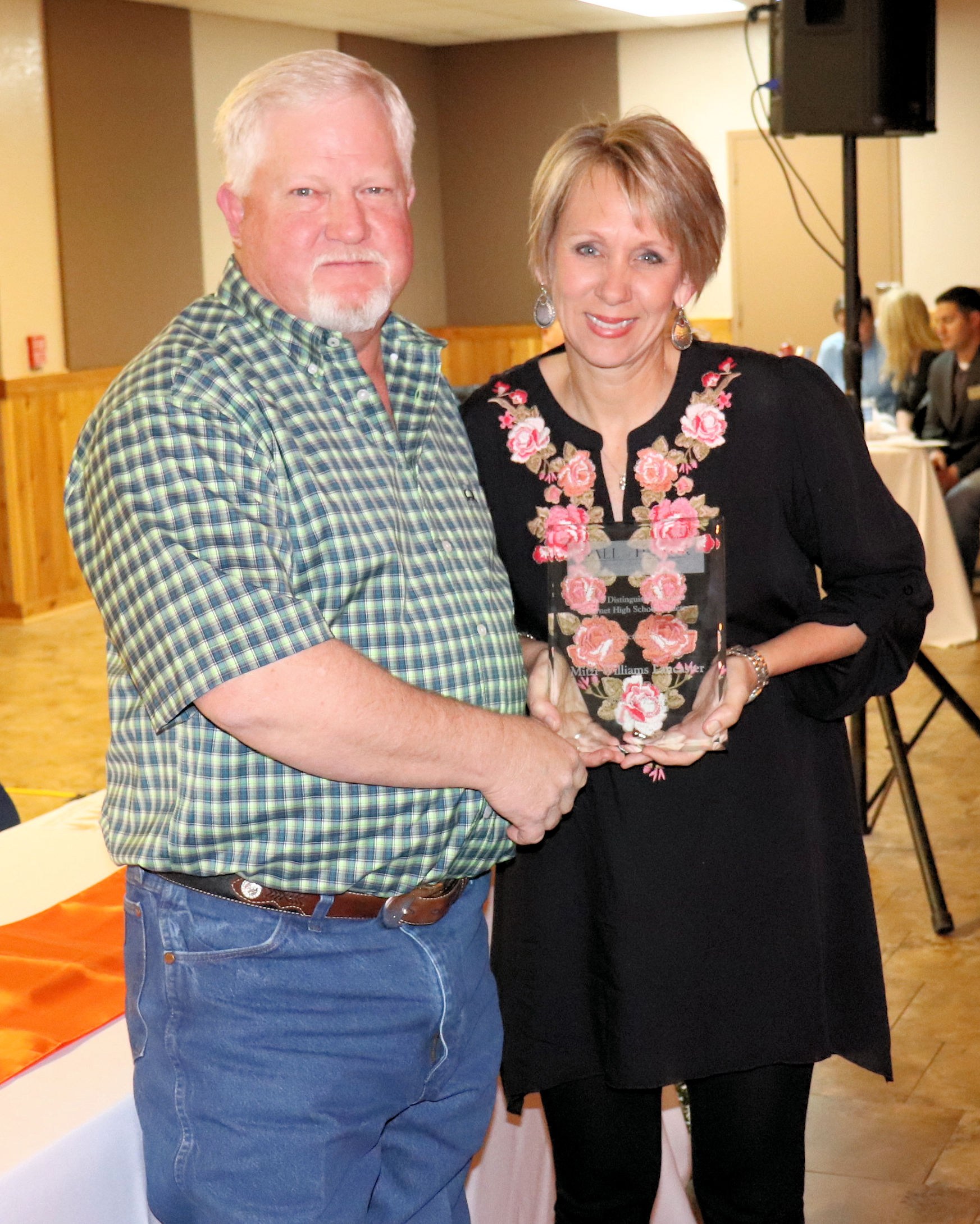 The Honoree for Distinguished BHS Athlete is Mitzi Williams Lancaster. Mrs. Lancaster is a 1988 honor graduate of Burnet High School. She not only excelled in basketball and track, but was an all-around outstanding student. Some of her high school honors include: Class President, sophomore class favorite, Student Council, Who’s Who Among American High School Students, Homecoming Queen, cheerleader, Miss BHS, Girls State Representative, a member of key club, FCA, National Honor Society and Spanish club. At an early age, she found a love for Basketball and Track and continued to excel in these sports through college.

In Track, she was a four-year letterman.  Mrs. Lancaster set meet records at Smithson Valley, Burnet, Mason, Llano, and Boerne – where she was also the high point scoring Girl. Her senior year, she scored forty-two points in the District Meet. She was a four-year regional qualifier. At the regional meet, she placed 2nd in the 200 meter and 1st in the 100 meter where she set a new regional record of 11.83. At the State meet, she placed 4th in the 100 and 3rd in the 200 meter. She continues to hold the Burnet High School record in the 100 and 200 meter. In college, she ran track for the legendary Clyde Hart for one year.

In Basketball, Mrs. Lancaster was a three-year varsity letterman. She was selected All-District MVP her senior year. She was 1st Team All-District and All-District Honorable Mention. After high school, she went on to play two years at Trinity Valley Community College as point guard. While there, she received the East Texas Sportsmanship Award Player of the Year chosen by the referee association and was Academic Junior College All American both years.

She then transferred to Baylor University where she started every game as point guard for Lady Baylor Bears. She was selected as Newcomer of the year by the Southwest Conference as well as the All-Academic team for two years. During her senior year she lead the nation in three-point shooting percentage. She was selected as a member of the Southwest Conference basketball team traveling to Australia and was named the Health, Physical Education and Recreation Department Woman of the Year at Baylor University her senior year. She graduated with honors from Baylor in 1993 earning a Master’s Degree.

Today, Mrs. Lancaster is the Girl’s Coordinator at Churchill Middle School in New Braunfels where she coaches basketball and track. Sports have afforded her many traveling experiences and she is always been proud to say she is from Burnet, Texas.
BCISD  Board Member Jeff Hullum presented Mrs. Lancaster with her award.
Distinguished Burnet High School Graduate: 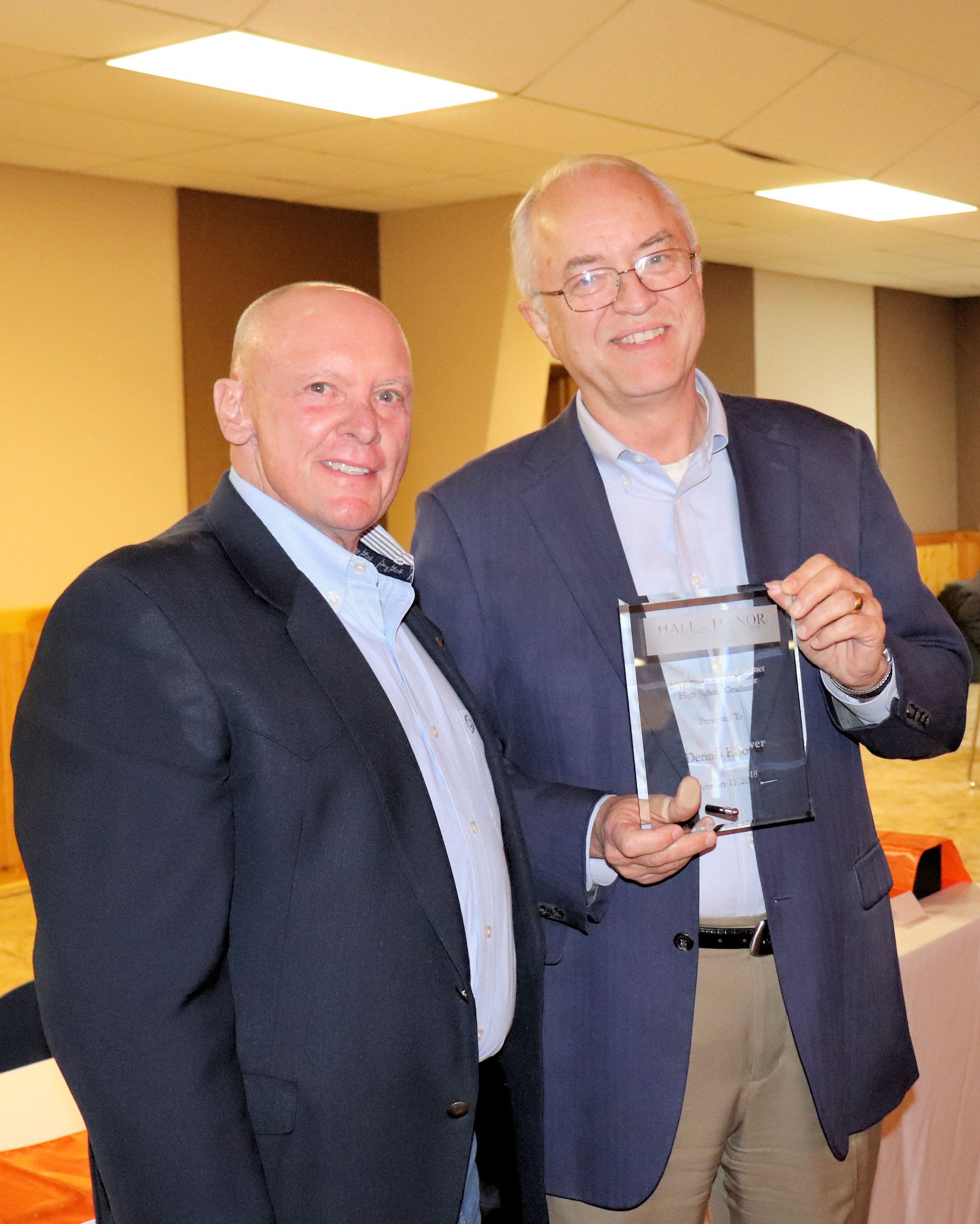 Dennis Hoover was born in Burnet and grew up working in the family business. During high school he played football and attended Camp Champion, and outside of class, he sang in the choir at First Baptist Church of Burnet. After graduating from Burnet High School in 1970, he attended the University of Texas at Austin where he became heavily involved with the Baptist Student Union, serving as the worship leader and as a summer missionary. He graduated from UT in 1975 with a BA in Music Education.
After returning to Burnet, Mr. Hoover,  along with his family, started Hamilton Valley Management, Inc. in 1981. Through hard work he has lead Hamilton Valley Management to be one of the largest management companies in its field, managing 93 affordable rural housing communities throughout Texas. In 2003, the United States Department of Agriculture recognized Hamilton Valley Management as the Management Company of the Year.
Mr. Hoover also has a heart to serve his community. He has served on the board of the Hill Country Community Foundation since 2007, been a member of the Rotary Club of Burnet for over 35 years where he served as a past president, is a member and past president of the Rural Rental Housing Association of Texas and gives generously to community outreach programs like the Boys and Girls Club, Seton Care-A-Van, Suzanne Johnson Scholarship Endowment and the Burnet County Livestock show.
Mr. Hoover shares his love for music and has served as the Minister of Music at Chapel of the Hills Baptist Church since 1978. He has traveled with the church on mission and building trips to Colorado, Mexico, and Ukraine. As an active member of the Singing Men of Texas, our honoree has traveled to Ukraine three more times to serve in music and English language ministries.
He and his wife celebrated their 40th wedding anniversary in 2017. They have three daughters, all who graduated from Burnet High School, and a one-year-old grandson.
Board President Andy Feild presented Mr. Hoover with his award.
Distinguished Former Employee: 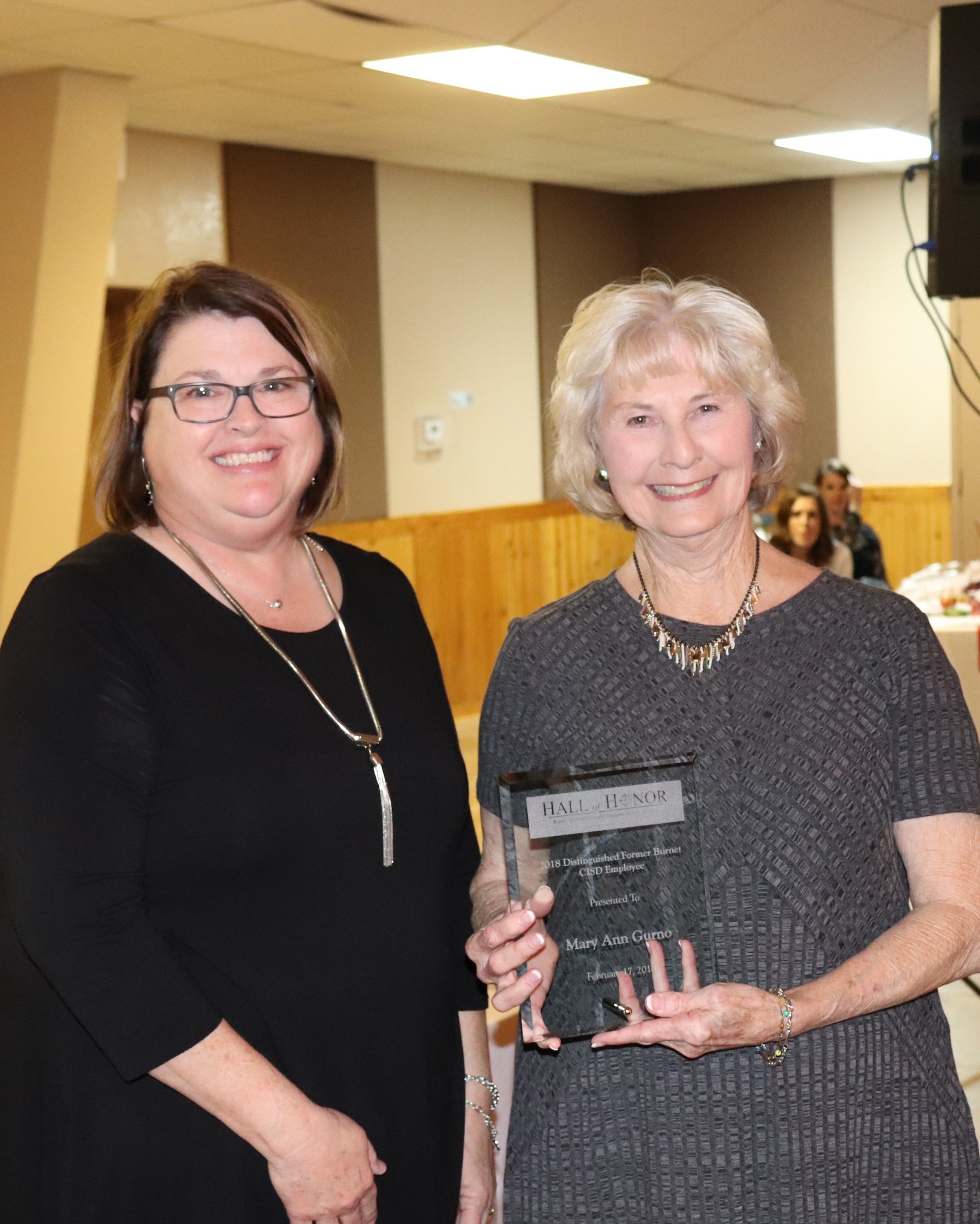 Mary Ann Gurno started teaching in 1967 in Killeen ISD where she taught for 17 years at the elementary level. She was hired in Burnet CISD in 1984 as a 6th grade teacher. After only one year, the District realized the expertise she brought to the District and named her Director of Curriculum and eventually Assistant Superintendent. She was a highly dedicated professional motivating students, teachers and administrators to strive for excellence. She exemplified professionalism in every task or responsibility assigned to her and her integrity was unsurpassed. She was known as a go-getter and worked tirelessly to make sure BCISD was the best school district it could be. Under her leadership, the district excelled in academics and many new programs were put in place.
In 2002, Ms. Gurno retired with 35 years of service in education, but continued to supervise bi-lingual and alternative certified teachers for Austin ISD, San Antonio ISD, and many small school districts across the state.
She has traveled the world graciously giving her time, talents and energy to worthwhile endeavors like establishing schools in Honduras, teaching women in Africa sewing, constructing apartments in Costa Rica, distributing medications to eradicate polio in Togo, Africa, carrying water for AIDs victims in Malawi, Africa and making numerous trips to Mexico helping to assist medical team and improve housing for the poor.
Locally Ms. Gurno volunteers with the Steven Ministry assisting people in need in Bertram and surrounding areas. These examples are just a few of the many ways she is constantly involved in activities that demonstrate her integrity, passion, generosity, courage and willingness to get involved and make a difference.
Board Vice-President Angela Moore presented Ms. Gurno with her award.