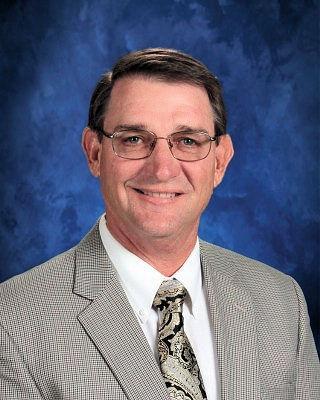 Burnet CISD’s honoree for Distinguished Former School Board Member is Mr. Danny Floyd.  Mr. Floyd is a 1981 graduate of Burnet High School. In high school, he played football and baseball, participated in UIL journalism, FFA and was a member of Student Council.

Mr. Floyd served on the Board of Trustees for two separate terms from 1996-1999 and from 2005–2008. During his time on the Board, he was instrumental in hiring the high school principal and superintendent. Also during his terms, Shady Grove Elementary and RJ Richey Elementary were built adding capacity to a rapidly growing district, and new baseball and softball fields were constructed to enhance the District’s extracurricular offerings.

Besides the dedication he gave to the board, our recipient is, and continues to be, heavily involved in the Bertram and Burnet communities.  Mr. Floyd was out of town and was unable to be at the banquet to accept his award.
Distinguished Former Burnet High School Athlete: 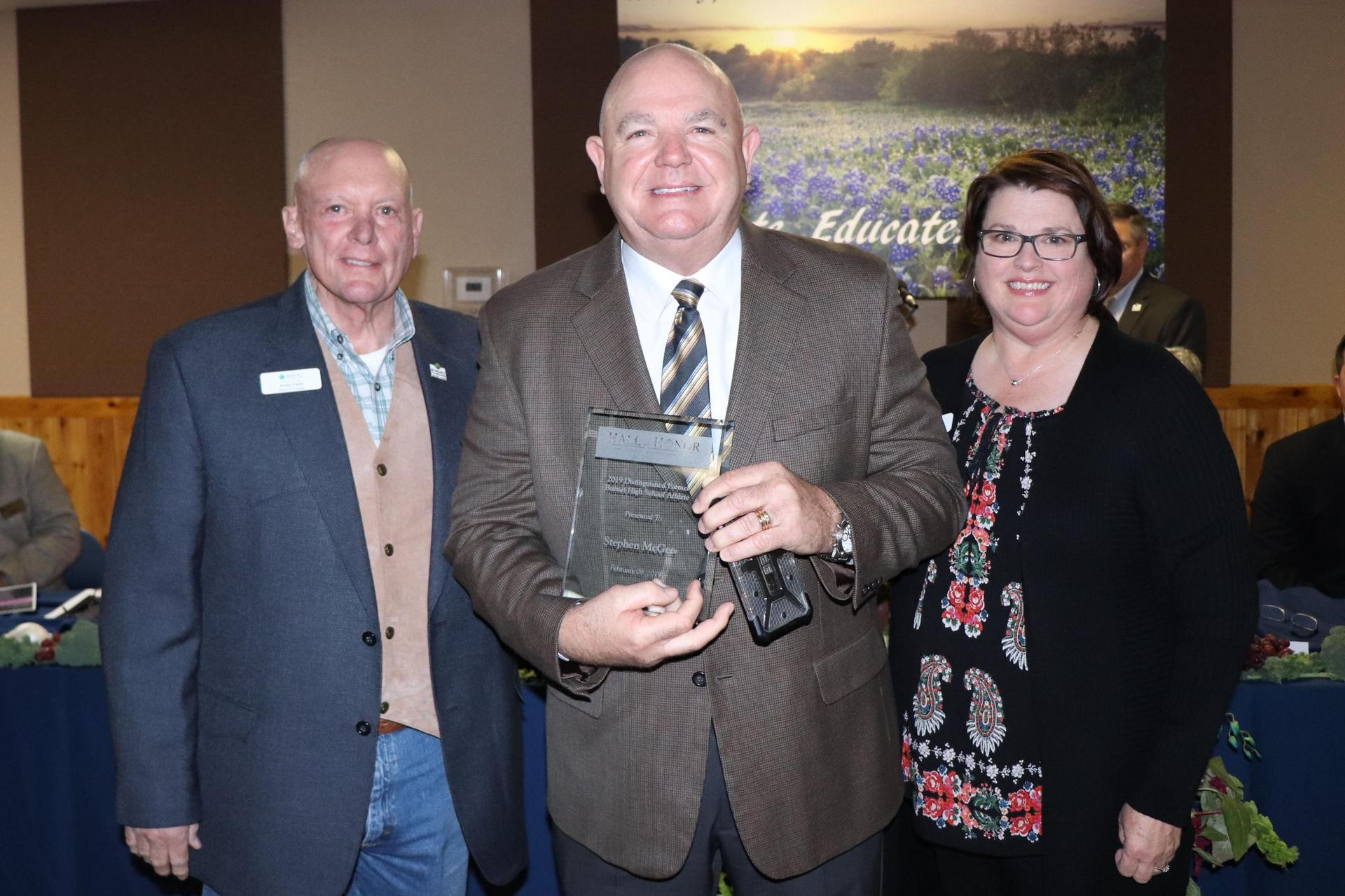 The Honoree for Distinguished BHS Athlete is Stephen McGee.  Mr. McGee is a 2004 graduate of Burnet High School. As an A Honor Roll student, he was one of Burnet's best all-time student-athletes, graduating 9th in his senior class.

Mr. McGee was a three-year starter at quarterback for the Bulldogs, where he led his team to a 36-5 combined record, including a 28-2 mark as a junior and senior. In both of those seasons, he led his team to the 3A state finals, and he did not throw a single interception during the regular season of his senior year. He finished his high school career with 8,256 passing yards and a 3A state-record of 101 passing touchdowns.

After high school, Mr. McGee went on to play for Texas A&M University, where he started all 13 games in the 2006 season leading the team to a 9-4 record.  He broke the A&M single-season completion record, successfully completing 62% of his passes, recording 12 touchdowns and only 2 interceptions. In the 2007 season, he contributed to 62 percent of the team's total yards, as he passed for 2,311 yards and rushed for 899 yards. He received a Bachelors in Business Administration and Masters in marketing from Texas A&M University.

In the 2009 NFL Draft, Mr. McGee was picked by the Dallas Cowboys in the fourth round, and at the time, became the first quarterback drafted by the Cowboys since 2001, and the second since 1991. The Cowboys were impressed with his strong arm, build, and his work ethic. He signed a four-year deal with the Cowboys on July 28, 2009.

After starter Tony Romo was placed on injured reserve in 2010, Mr. McGee became the Cowboys' second-string quarterback, behind Jon Kitna. During the season finale against the Philadelphia Eagles, he started his first NFL game. He went 11-27, 127 yards, and completed a touchdown pass to Jason Witten with 55 seconds left in the game to give Dallas a 14-13 victory over their divisional rival.

Mr. McGee currently lives in College Station with his wife Brittany where he works as a financial planner and is an avid hunter. Unfortunately, Mr. McGee was unable to attend the banquet. In his absence, School Board President Andy Feild and Vice President Angela Moore presented the award to Rodney McGee, Mr. McGee's father.

Distinguished Burnet High School Graduate:
The honoree for Distinguished Burnet High School Graduate is Travis Lewis. Mr. Lewis was a member of the 1992 graduating class. During High School he participated in football as part of the 1991 State Championship team, Placed 2nd in the State Track meet for Shot-put, and was a swimmer on the Regional qualifying team. He also competed in UIL speech competition, 4-H competition for speaking, and was a member of the National Honor Society.
After High School, he attended the United States Air Force Academy. While there, he won the most outstanding Military Candidate award. Following the Academy he attended Undergraduate Pilot Training earning pilot wings in the United States Air Force. He retired from a highly decorated career in the Air Force after 21 years of service, 7 of those being deployed flying in multiple conflicts to Kosovo, Afghanistan, Iraq, and other locations in the war against terror. He is currently living in Caseyville, IL serving as the Director of DoD Solutions for NextGen Federal Systems. He plans to move back to Lake Buchanan after his two children finish school.
Mr. Lewis was not able to attend the banquet, so his parents Glen and Carol Lewis accepted the award on behalf of Mr. Lewis.
BCISD Distinguished Former Employees 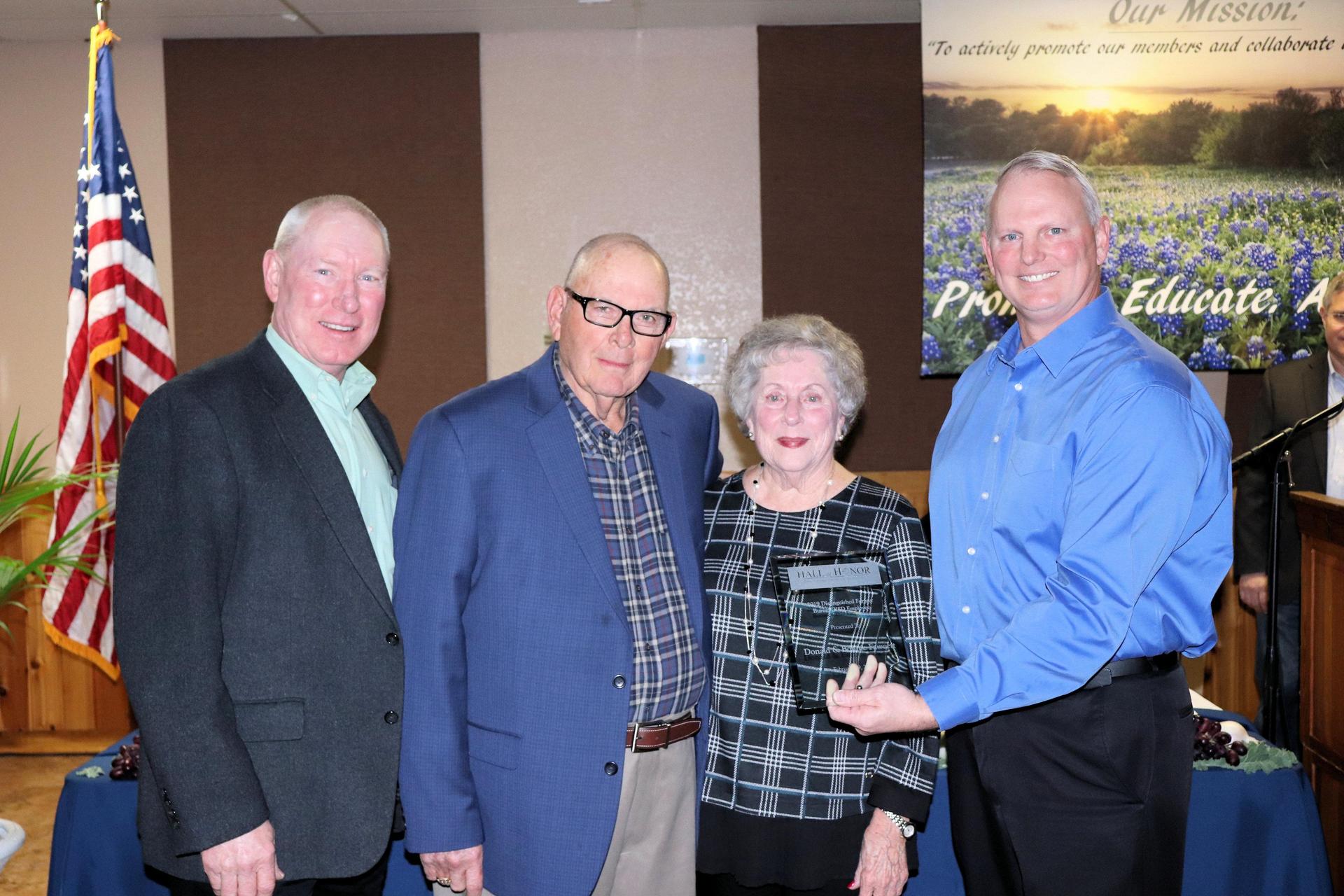 Bonnie and Donald Fawcett, BCISD Distinguished Former Employees,  embody everything that is Spirit, Pride and Honor and also the heart of this community. Our selection for distinguished former employee is a little different this year because we are honoring two people. They have a total of 64 years of combined service to Burnet CISD. Our former employees are truly rock stars because like Cher they are known by their first names, and Bonnie and Donald were the original Brangelina- it is hard to say one name without the other.
Bus driver, instructional aide, secretary to the superintendent, special education department clerk and facilities and maintenance department employee are just a few of the many titles Bonnie and Donald held within the district, but those job titles don’t come anywhere close to describing what they really meant to Burnet CISD.
You all know that every position has a job description, and Bonnie and Donald always performed the tasks listed in their job descriptions in an exemplary manner, but it was all of the little things, outside of their job description, that made Bonnie and Donald the gems of Burnet CISD. They both worked tirelessly to make sure Burnet CISD was the best place for students and staff, and they were, and continue to be, advocates for all students and all staff.
Bonnie and Donald have been recognized by this community through awards such as Honor Citizen, Senior Citizen of the Year, Outstanding Citizen, two Golden Trowel Awards for exceptional service, the Rotary Club Paul Harris Fellow award and Community Builder Award. Their heart to serve this community is evident in their volunteer efforts with the Masonic Lodge, Herman Brown Free Library and the Library Thrift store. However, they also quietly serve in other ways such as delivering candy on Mother’s Days to the widows of past Masonic members, buying class rings for students who may not have otherwise been able to afford it, and volunteering to cook for countless fundraising events across the community.
Bonnie and Donald are both very humble people, and I don’t think they truly realize how much their actions, words, and deeds mold the people around them. They have touched and continue to touch countless lives. Bonnie and Donald were presented their award by BCISD Board members Mark Kincaid and Ross Behrens.