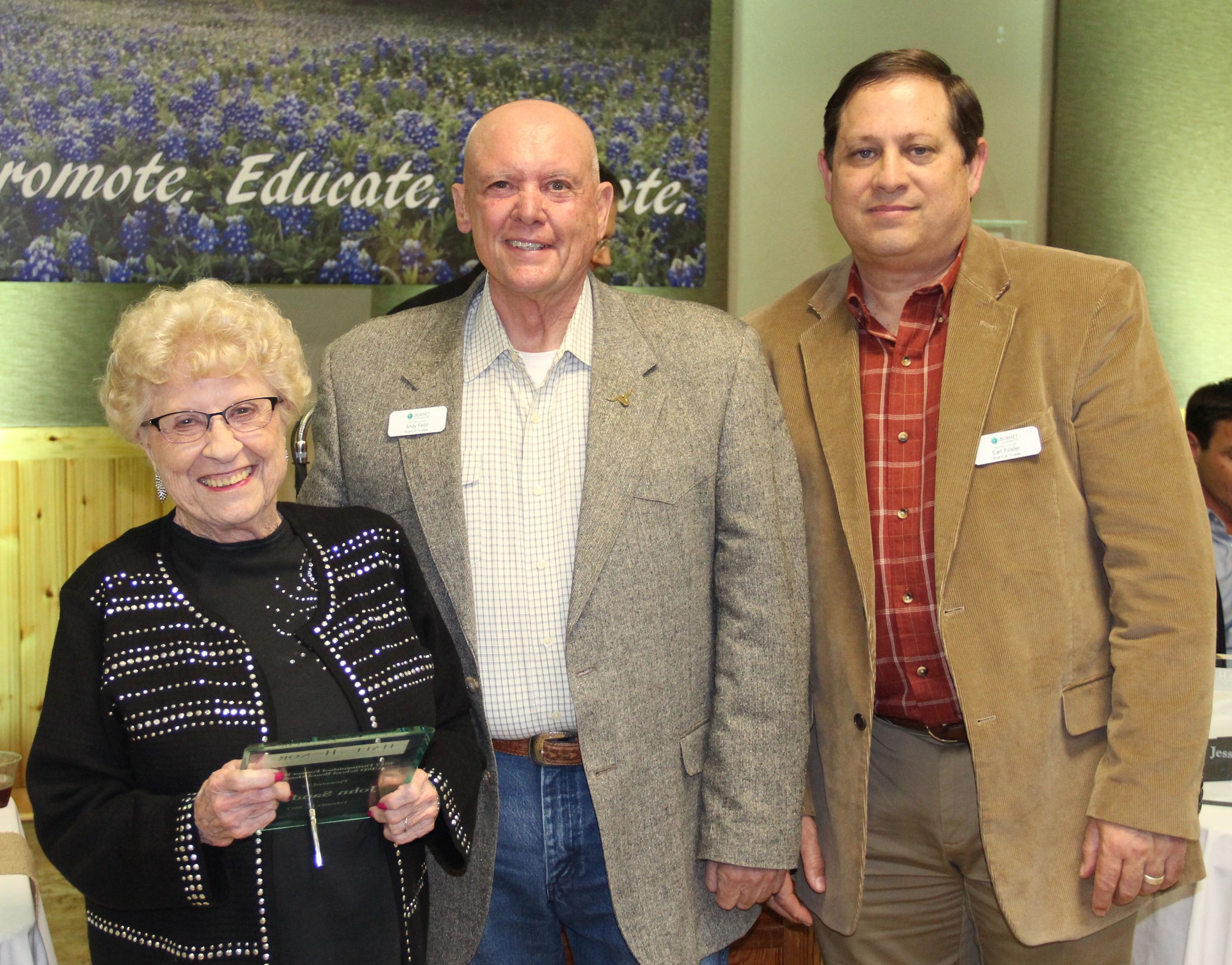 To start his optometry practice, Dr. John E. Sandner moved his family to Burnet in 1957. He quickly became a leader in the Burnet community with a passion for promoting Burnet. He was a member of the Kiwanis Club, a member and president of the Burnet Chamber of Commerce, and member of the First United Methodist Church where he chaired many committees.
Besides the many community organizations he was a part of, Dr. Sandner was the most committed to education and making the Burnet school district the very best. He served as a School Board member from 1960 to 1974 serving as president for ten of his fourteen years on the Board.
During his time serving on the Board, he was asked to make decisions during a time that Burnet ISD was experiencing many changes, one of those being the consolidation of Bertram and Burnet school districts. Dr. Sandner's goal was to make the transition as smooth as possible for all involved. Additionally, through his leadership, he led Burnet CISD through the tornado that leveled the high school and worked tirelessly to relocate students. He was instrumental in helping to pass bonds to build many of the schools in Burnet, as evident by the many building plaques throughout the district with his name.
Even years after his time on the board, Dr. Sandner loved and supported the Bulldog football teams and went to every game until he was physically unable to attend. He was also a huge supporter of the band and swim team.
Besides his family, his church and the City of Burnet, education and Burnet CISD were his top priorities and he was honored to serve and be a part of it. Dr. Sandner passed away in 2013, but leaves a legacy of supporting the community and Burnet CISD for over 50 years. His family still plays an active part in the community and school district and have said that even though he received many awards throughout his life, the Hall of Honor Recipient for Distinguished Board Member would have meant so much to him.
Dr. Sandner's wife, Evelyn received the award on his behalf from Board President Andy Feild and Board Secretary Earl Foster.
Distinguished Former Burnet High School Athlete: 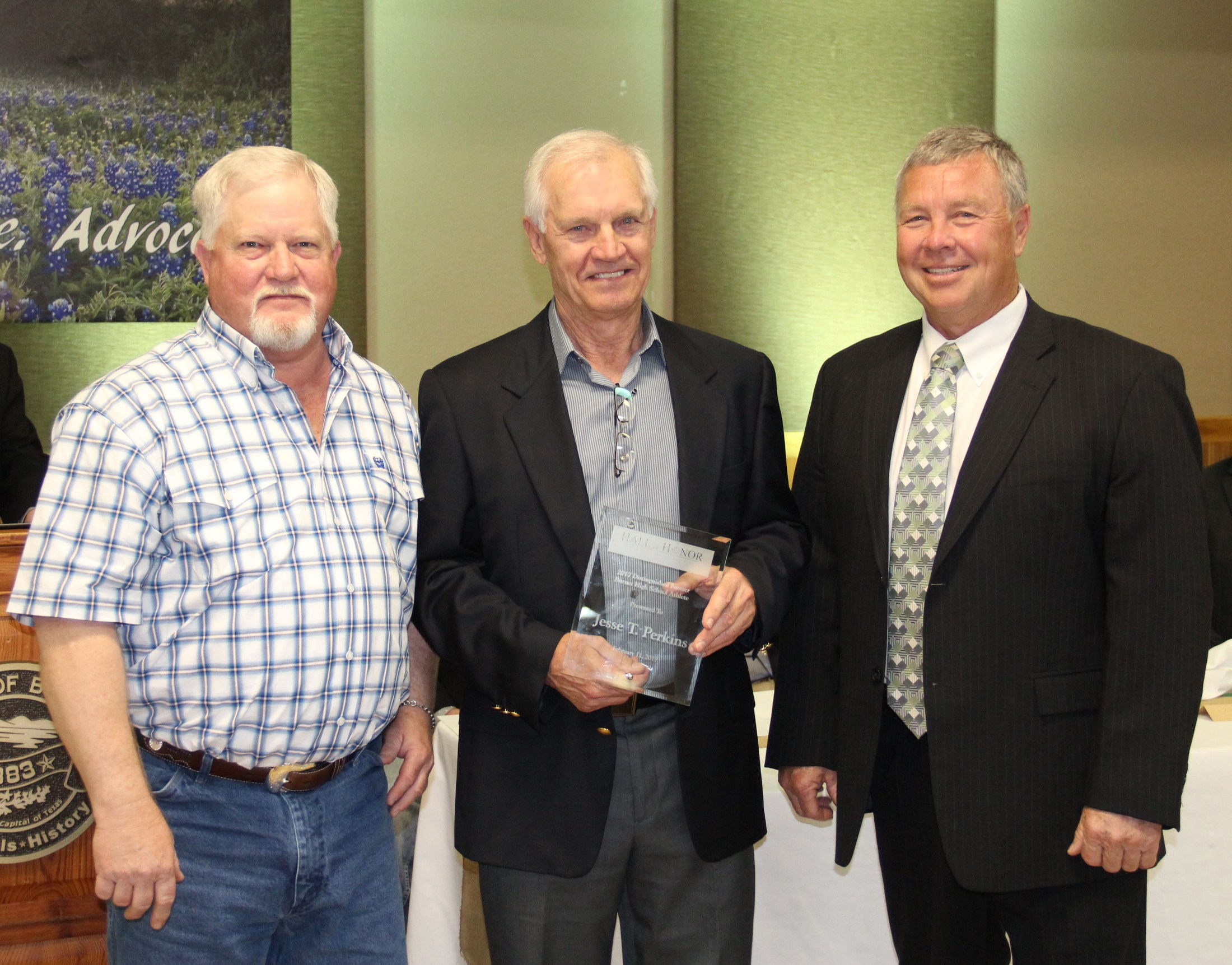 The 2017 Hall of Honor Distinguished Burnet High School Former Athlete is Mr. Jesse Perkins.   Mr. Perkins graduated from Burnet High School in 1963 where he was an all-around athlete playing football, basketball, baseball and competing in track. He played football for all 4 years in high school as the quarterback. He was a 3-year letterman, named All District for three years, and made both the All-State Team and All-Central Texas Team his senior year. He led the Bulldogs to a district championship in 1963 and to the playoffs. In the Bi-District game against Albany, the Bulldogs tied the game at 28-28 but lost due to Albany having one more penetration. Albany later went on to win the state championship.
In Basketball, Mr. Perkins played all 4 years of high school as a starter, lettering for 3 years. He was named All-District for 2 years and was selected to represent the district in the All-Star game his senior year. The team won district and bi-district but lost at regionals at North Texas State. In baseball, he played all 4 years as a pitcher and outfielder. The team won Regionals his junior and senior year, as Playoffs didn’t advance any further during that time. Again, Mr. Perkins was named All-district and All-State. In Track and Field, he was the pole vault District Champion, high jump District Champion and went on to win 2nd place at the regional meet in high jump. During his senior year, he ran on the sprint relay team.
After high school, he received a full scholarship to Southwest Texas State University. After being red-shirted his first year, he became the starting quarterback for 4 straight seasons. As a freshman, he received Honorable Mention All-Conference and as a sophomore and junior he led the team to runner-up conference champions. By the time he became a senior he had started 40 straight games on a team that was rated the Number 1 team in the nation for 8 straight weeks. The team went 9 – 1 and were undefeated until the last game of the season, losing by a field goal in the last 30 seconds of the game against Texas A & I. His senior year he was named All-Conference, College All-American and was selected outstanding quarterback of the conference. Mr. Perkins held the record for total offense, running and passing combined, for over 10 years. Today he still holds the Southwest Texas record for fewest interceptions in the conference as a Freshman quarterback. In 1988, he was inducted into the Texas State Athletics Hall of Honor.
His talent went beyond just the football field – Mr. Perkins also played pitcher for the Texas State Bobcats for 3 years. After graduating from Texas State in the spring of 1968 with a degree in education, he became the backfield coach at Corpus Christi King High School then went on to coach at Carrizo Springs High School.
Mr. Perkins entered the business field in 1970 as a banker but later started Perkins Insurance and Real Estate. He was active in the community as a member of the Lions club for 20 years, serving as president for 2 years, a member of the Carrizo Wildcats Booster Club, and member of the Chamber of Commerce, where he served as president for 2 years.
Presently he is semi-retired and lives in San Antonio with his wife of 48 years, Sue. They have 2 children, daughter Jessica and son Troy Stuart and one grandchild, Logan Ann.
BCISD Board members Jeff Hullum and Craig Barefoot are pictured with Mr. Perkins.
Distinguished Burnet High School Graduate: 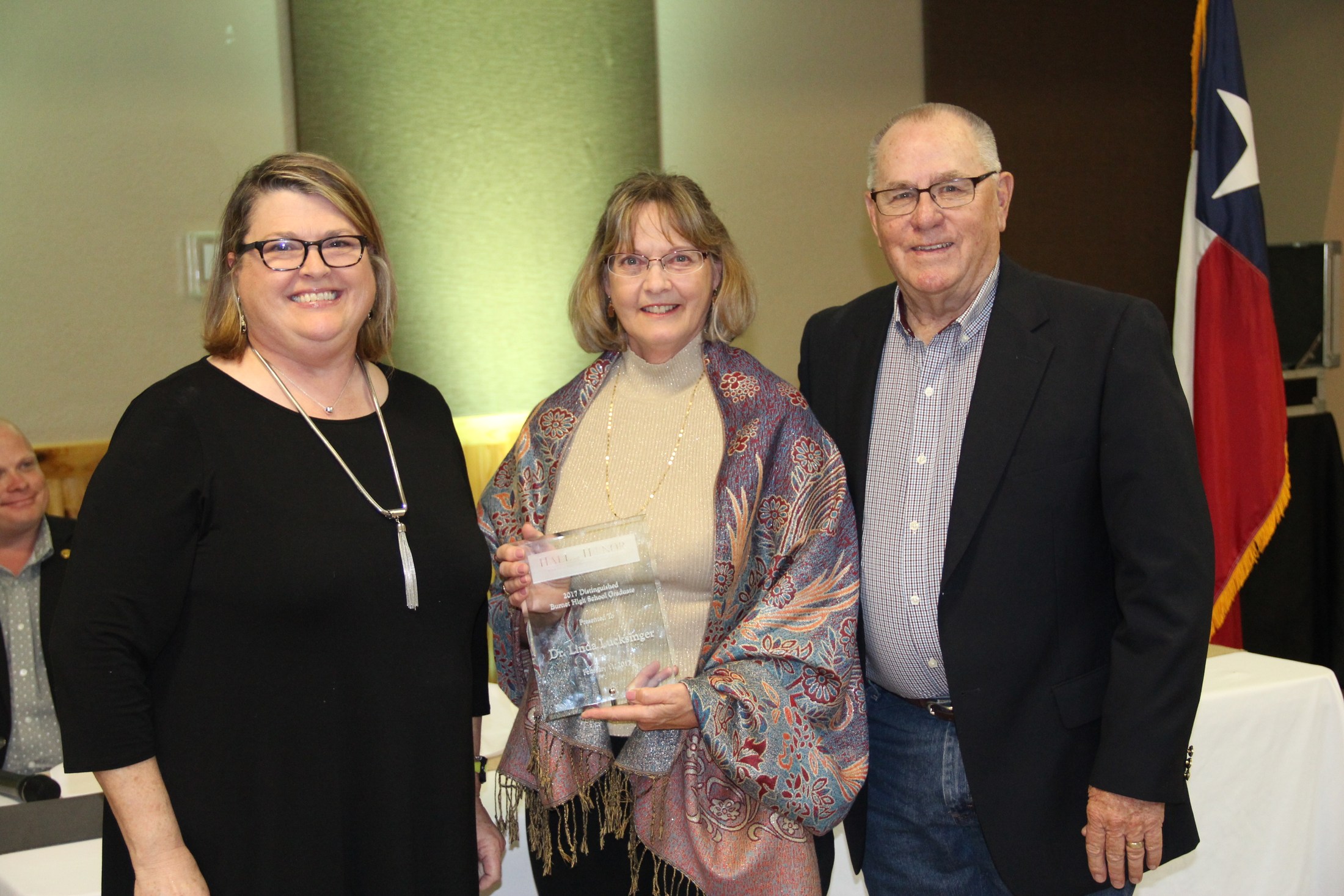 Dr. Linda Lucksinger, graduated from Burnet CISD in 1968. She was a member of the swim team, was on the pep squad, was senior class treasurer, a member of Future Homemakers of America, a nominee for the harvest festival, was voted Friendliest and was crowned the Football Sweetheart. The success did not end with high school. Dr. Lucksinger earned a Bachelor’s Degree from the University of Houston in Elementary Education, a Masters in Elementary Education/Supervision from South West Texas State University and then a Doctorate from Texas A&M University in Educational Psychology with a specialty in gifted education.
After receiving her bachelor’s degree, Dr. Lucksinger was a teacher in Aldine ISD and Lampasas before returning to Burnet to work as an elementary teacher finally becoming the GT coordinator. She persisted in her career path to become a highly recognized professor and department chair at Schreiner University, Sul Ross State University and Angelo State University where she worked in the education department for all three universities.
Dr. Lucksinger was instrumental in program development and several initiatives at all of the above mention universities and has 11 peer reviewed publications. In addition, she professionally presented in workshops and trainings too numerous to mention. She has represented many universities at the national level giving presentations in the realm of educating gifted and talented students.
Dr. Lucksinger has won numerous acclaims including Meritorious Faculty award from Sul Ross State University and the Texas Association for the Gifted and Talented Advocate of the Year. She has given hours of community service to support the Texas Parks and Wildlife, the San Angelo Symphony, Meals for the Elderly and KERA public TV and Radio.
After giving many years of service to educating children and adults, she retired from San Angelo State University in the spring of 2016 and now lives in Fredericksburg with her husband Dan, who was her high school sweetheart, and her dog Nina. She is enjoying her retirement by reading, traveling and spending time with her mother.
Board Secretary Angela Moore and Board member Charles Williams presented Dr. Lucksinger with her award.
Distinguished Former Employee: 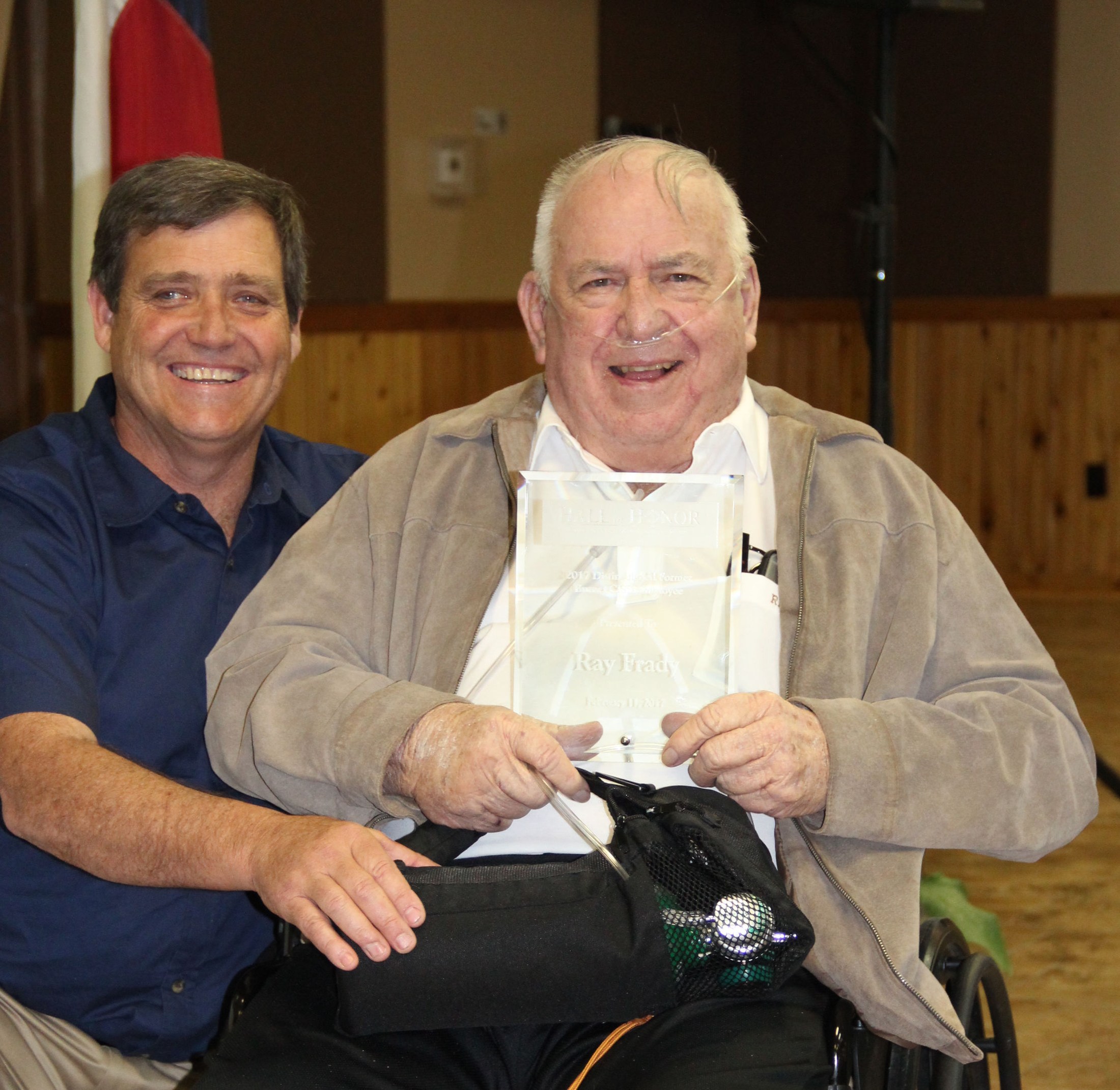 This year’s honoree as the Distinguished Former Employee is a true legend in Burnet County. Coach Ray Frady graduated from The University of Texas in 1956.  He began his education career in Kingsville ISD as a teacher and coach, and then moved to San Angelo where he taught and coached for 8 years. During that time, he was on the coaching staff of the state championship football team along with coaching greats Spike Dikes and Emory Bellard. In 1969, he began his 10 year career in Burnet ISD as Athletic Director and Head Football Coach, turning down an assistant coaching position at his Alma Mata the University of Texas. He inherited a team that hadn’t seen much success in the previous 5 years and the Bulldogs went 0 – 10 his first year. One of his strongest attributes was his ability to take a struggling team and help them become winners by establishing a culture of Spirit, Pride and Honor, a phrase that still lives on in Burnet CISD today. As evidence, Coach Frady never had a losing season after that first rebuilding year. In 1972, the Bulldogs were just one point short of a district championship, and in 1973 they fell three points short. However, in 1974, the Bulldogs became the district champs advancing to the playoffs where they lost to the eventual state champions.
Coach Frady's focus on building a culture of Spirit, Pride and Honor came at a time when Burnet and Bertram were consolidating. Even during this difficult transition, his expectation was to establish a school system that the students and the community were proud of and where everyone was unified as a Bulldog. One way to do that was through song- the school song. With the assistance of John Lopes and Natalie Guenter, he worked to change the Burnet High School fight song to the song we currently have, which helped bond students that in many cases were sharing a classroom for the first time. His influence was much greater than just athletic successes. He strived to provide support to all students and the community, yet it is out of his character to take any recognition for the work he did or the successes he had.
Even today, Coach Frady can’t go anywhere that former students and fellow employees don’t seek him out just to talk, take a trip down memory lane and catch up. Everyone who knows him would describe him as a person who has a love for working with kids and someone whose very high morals and ethics match the way he lives his life through his words and actions. Although, he may be best known for his quick wit and sarcasm.
In order to spend more time with his family, he left Burnet CISD in 1978 to take a fulltime job as the Camp Director for Camp Longhorn, although technically, he worked every summer at camp starting in 1952 as a counselor and then the Director of Activities. He retired from Camp Longhorn in 2005 and with that many years under his belt, it would be hard to find anyone who has touched the lives of more children and adults and committed to a career of educating and leading children on a year round basis.
Coach Frady has also been very active in the Burnet community. He served on the Chamber Board for 3 years and in 1974 was named Burnet’s Honor Citizen. He helped with the creation of PeeWee Football in the Burnet area; he is a member of the Kiwanis Club and is a member of the Methodist Church. He has been married to his wife Helen for 60 years. They have one daughter, Pam and he is the very proud Grandy of grandsons Jonathan and Nick and granddaughter Lindsey.
School Board member Robby Robertson presented Coach Ray Frady with his award.